It almost looked like Dita and me were not meant to be – the model is so popular that it sold out pretty much immediately and the company had to get a new batch before it could be shipped my way. It speaks volumes about both the bra (I don’t think I can recall any model that was so succesful in Poland) and the company (I am happy that the company prioritizes consumers and not the bloggers – in this lingerie circle of life we are not the most important tier, not even close). Dita finally arrived and I can happily say we are in for a treat here; we, because a lot of you already have your own Ditas.

Dita is another bra with corset lacing detail – Shirley had an element of that on the panties, while Dita has it on the cups and on one version of the panties available. 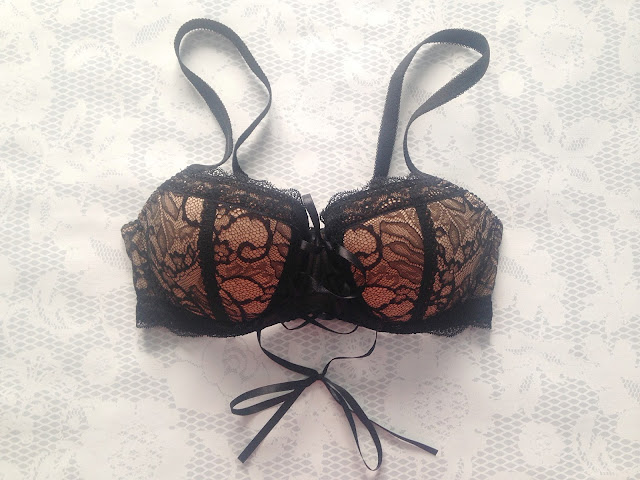 Corset lacing on the cups is loose and can be regulated to accomodate the tastes of the wearer – you won’t be able to push boobs together with it like with those magic Instagram bras (wehn my boyfriend saw me in Dita that was the first thing he attempted to do, but I managed to save Dita from impending doom), but you can remove it altogether. Vivat versatility! The space between lacing has been covred in fine netting, which makes the area look shadowy and deeper, thus making the bust look more projected. I asked the Gorteks’ model what size is she, and that is reportedly 70D (shout out to Wioleta!). It’s a bit hard to believe for me (I guesstiated 65H, to be honest), but the effect on Wioleta is amazing. 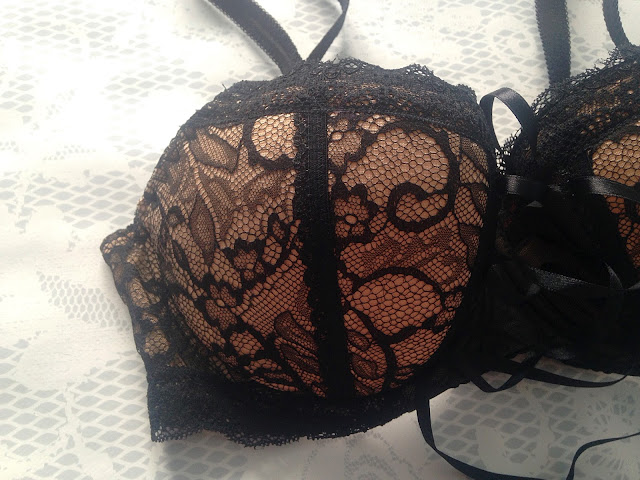 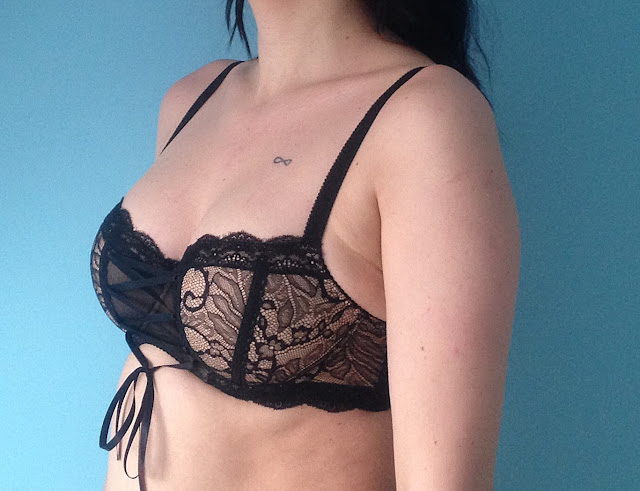 It’s not often that I am distratcted by my own cleavage – but my peripheric vission catches it now, so I have trouble keepinmg my focus. Keeping my size in mind it is kind of a new thing and unusuality for me to see my boobs while looking straight forward. By the way, because you ask very often about the atter: the gibbosity underneath my boobage and the assymetry of my shoulders and ribs is caused by my 38 degree scoliosis- I am afraid it is going to stay that way and that is the only thing I ever retouch, straightening the pictures slightly. I always think I stand straight, and then on the picture I see I am way, way off being straight. 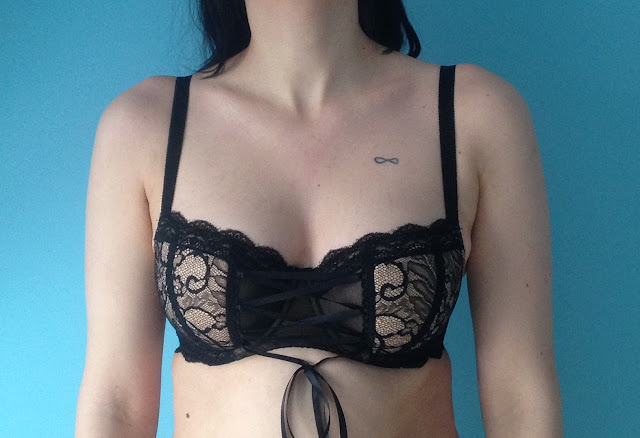 There is nothing on the gore – and I am pleased with that. That would be too much in my opinion, and I never appreciate overdone bras. I like when the designer knows when to stop, even when he or she has an array of bows, charms, pendants, and beads to work with. 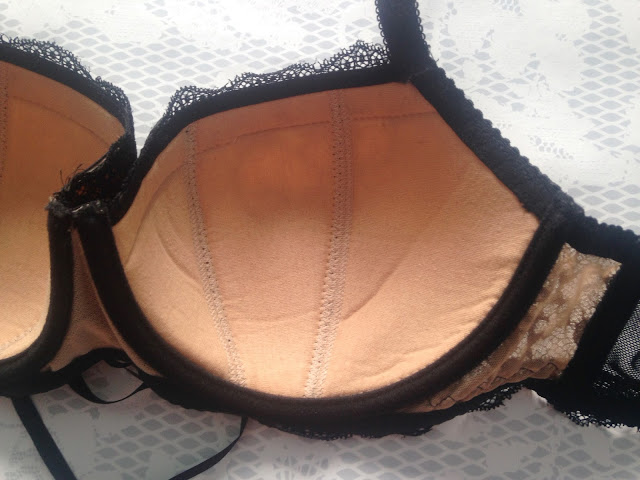 If I gotta be honest I have to say I would like more subtlety in this bra – I have seen it in real life before, but I guess my admiration for its a) balconettism, b) corset lacing clouded my judgement a bit (altough samples I see at trade shows are usually a bit different from what is actually sold). Combination of black and goldish beige which looks gray in stock pictures, is elegant and smart, but something is missing. One thing I can point out here is the lace – I would like it to be more luxurious and delicate, since the one used looks a bit too coarse and thick. It reminds me a bit of old curtains. I think Dita would gain so much in looks if it was swapped for jaquard netting or lace with smaller floral elements. 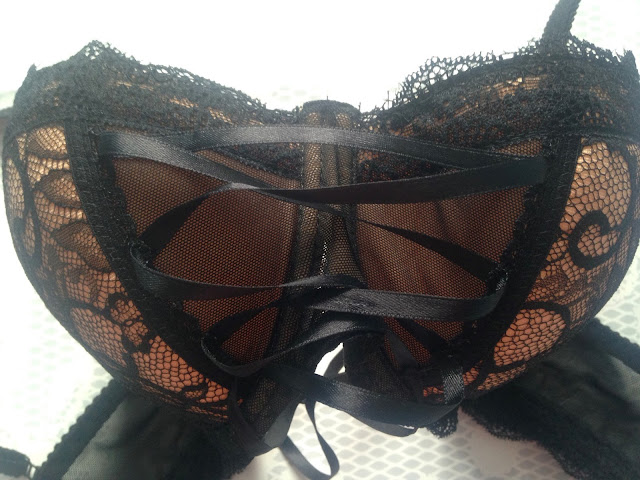 I would say that this is a small misstep for a brand that experiments with style. This model is perfectly balanced, but not a fuckup either – just a bra that ranks halfway up my aesthetics scale. I always appreciate bravery and panache (see, I can make jokes) and attempts to put something new out there. I have to say Dita reminds me tremendously of the black Wonderbra strapless bra with lace; I scratched my head for two days until I figured out what Dita looks like to me. 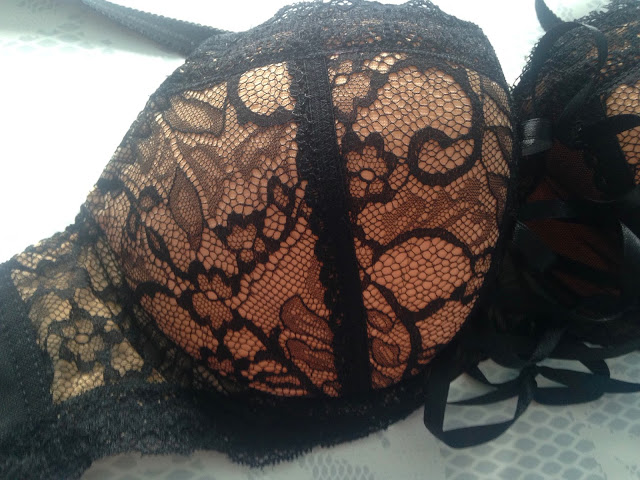 The band features additional support boning- altough I ignore it usually, since it doesn’t hurt, bother, or influence the fit, in this bra it is a nuisance. When I pose at an angle it looks like my boobs escape the admittedly narrow wires – even though I scooped and swooped – and the vertical boning digs in. Even though it is painless, it also makes the overall fit worse. I would work on that. 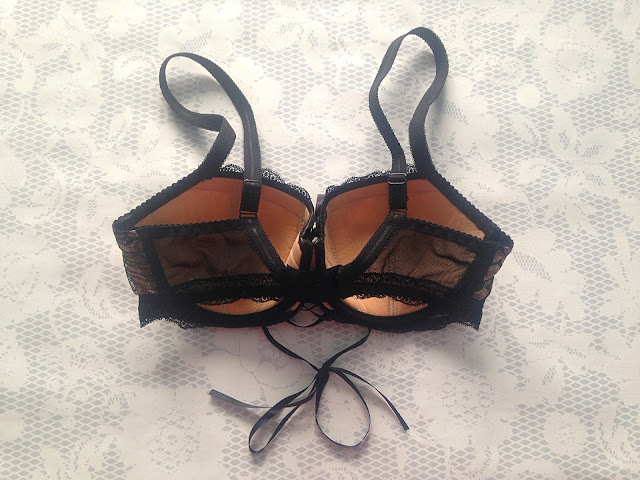 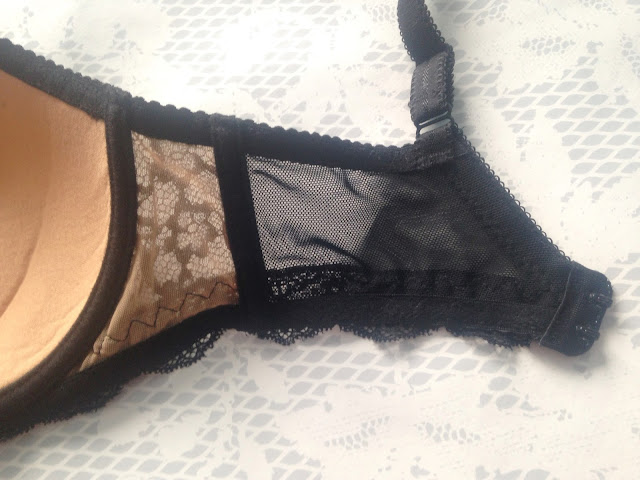 I have never had a Gorteks balconette and very excited with a possibility to discover another bra that will make my boobs nice and round. If you ask me, however, if Dita makes my breasts look like ‘apples on a plate’ and/or if it fits in 65G, my answer is ‘no idea’. Depending on the day Dita flattens my bust, brings it forward or hides it under my pits, which makes me think that this cut is just sized in a way that leaves me between sizes. A slight change in daily water retention has Dita fit too big, too small or just right. 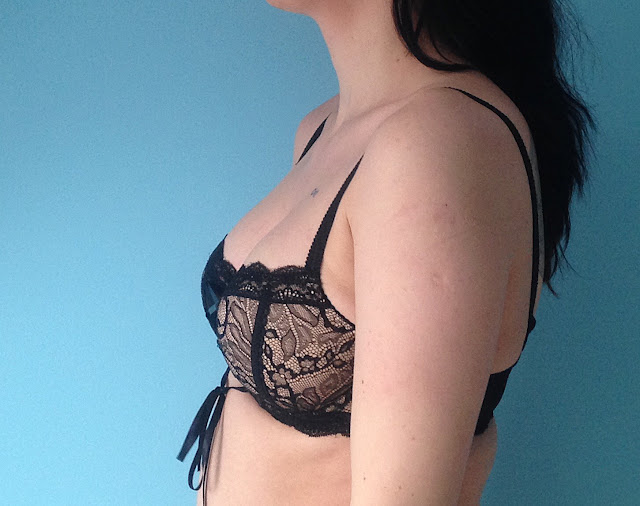 Band is rather tight for a 65, but not dramatically – definitely less tight than Shirley was. 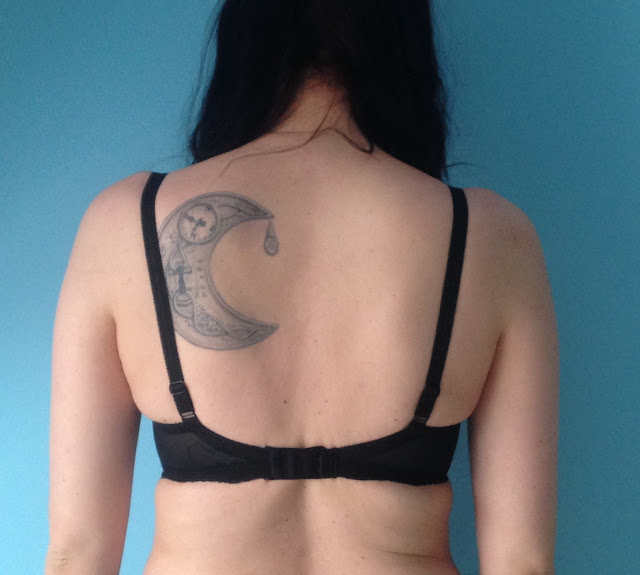 Is is a lounge bra? Not necessarily. The band tends to roll inwards and rub against my skin after a few hours of wear. Easy to fix with a slight tug down my body, but I would not recommend sleeping in Dita.

Panties are really, really nice – briefs with lace on the buttocks (I like that word like no other) which is possibly my favorite cut. Given that I fattened up to EU 42 size (about 14 UK) that was the size I was sent by Gorteks and it fits perfectly. There is a choice of corset-laced panties too, but I preferred the simpler ones, not to overshadow the bra. I have to add at least one scoring heart for briefs, since my butt looks in them quite well. 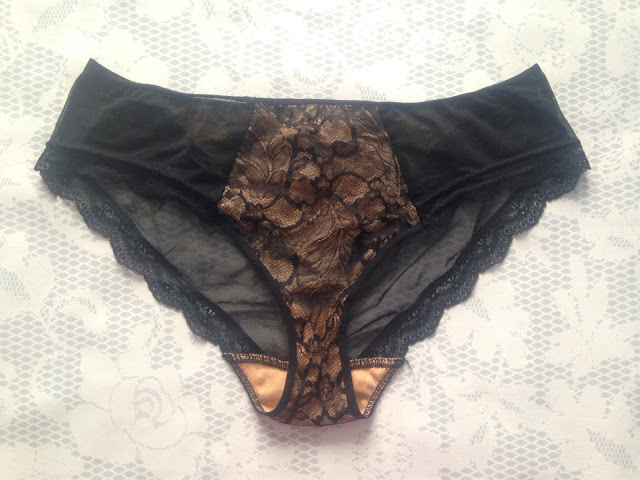 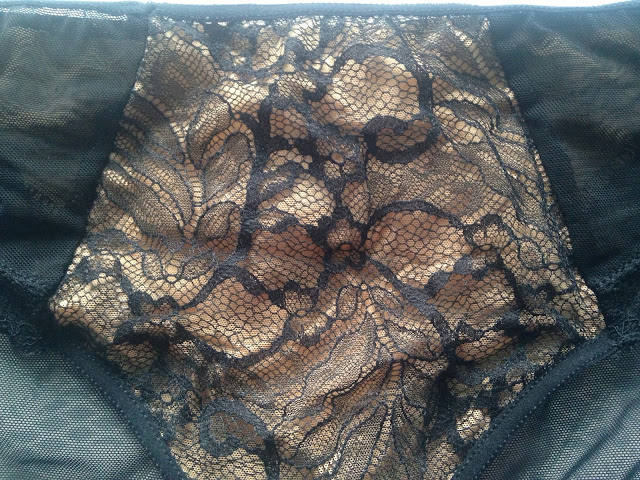 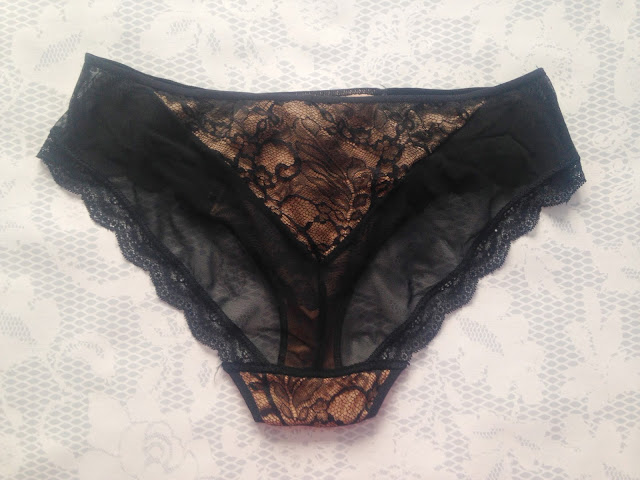 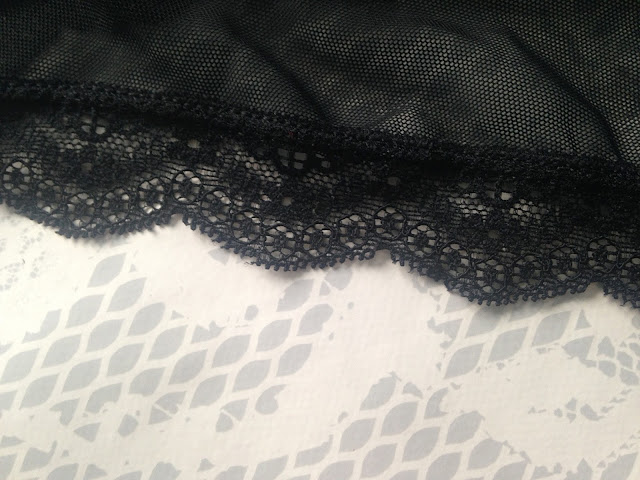 Price of Dita is around 90 PLN – yet another time we are provided with a produst that is of decent quality, looks, and price. This has to be boring by now, because Gorteks has never sent us a really bad product or something I am not pleased with. And that is very well, since Gorteks is our definite winner when it comes to affordable, wearable and cute lingerie that is accessible to gals of all monetary abilities, so to speak. Polish boobs want to wear Polish lingerie, and our brands should follow suit when it comes to Gorteks’ and their development.

And, always: we would like more sizes in the table, please.