by Admin
Other
No comments
0 shares

I chose Coralia as my review bra due to its original colour (we really do hear your suggestions and wishes, gals!) which upon closer inspection turned out to be even more … original. Reviewing took me a while since it is a bra that needs time and space to show off its strengths.
Wymiary/Measurements:
Obwód rozciągnięty/Band streched:  74,5
Obwód w spoczynku/Band:  67
Szerokość pojedynczej fiszbiny/Cup width:  18
Głębokość miski/Cup depth    27,5
Długość pojedynczej fiszbiny/Wire length: 28,8
Szerokość mostka/Gore width:  1,8
Wysokość mostka/Gore heigth:  8
Wysokość pasa koło miski/Wing heigth: 11
Szerokość ramiączek/Straps width:  2,1
Haftek w rzędzie/Hooks: 3
Ocena: / Rating:
Estetyka / Aesthetics

The stock picture is really nice, but honestly – after a while of actually wearing the bra – I don’t really know how am I supposed to achieve that effect of ass-cleavage. 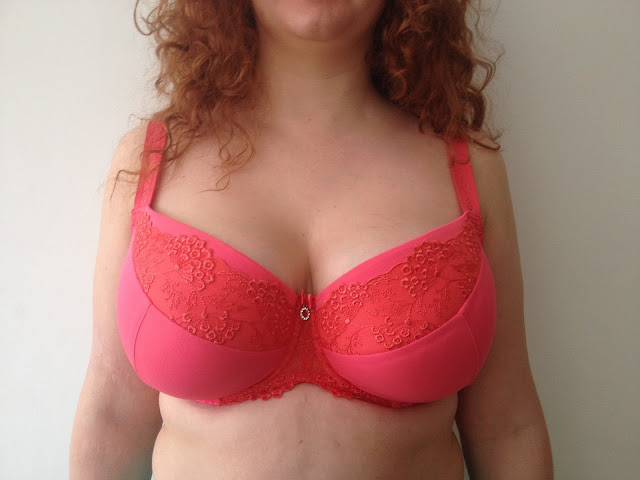 Time is a friend of Coralia – I was quite skeptical at first, having a lot of concerns about the shape it gave me, and I had no idea what was the problem. With a few more wears the cup adjusted fortunately and met my boobs halfway, so to speak.
The depth / width ratio is still not perfect, which happens to cause the slow descend of the cups thorough the day, fucking up the shape, but with each wear the situation gets a bit better. 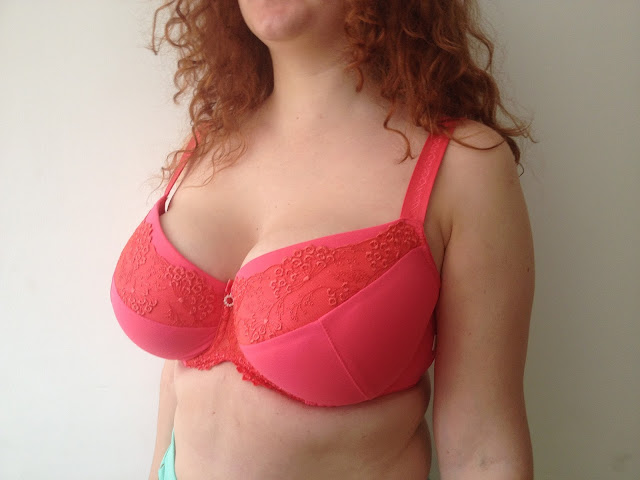 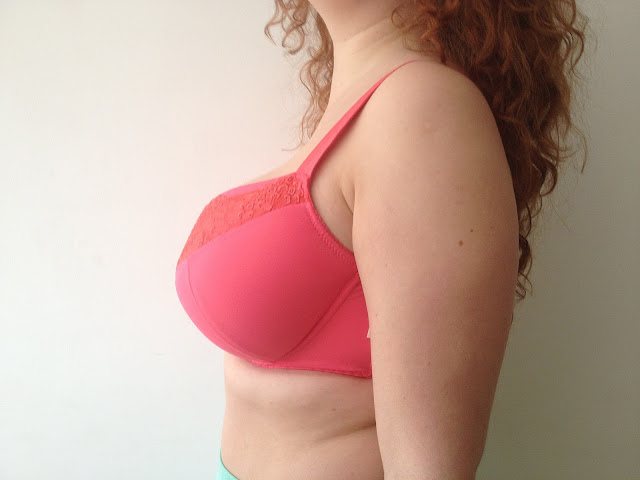 There is a bit of gaping where the straps meet the cups, but it is not a big of a problem – can’t be seen under clothes.
What is a bigger problem is that lately I feel like Michelin mascot. I really wondered if I should show myself, review bras – beacause my complexes take the best of me sometimes and the beauty standards can be really overwhelming. What helped me was not the bra, but a bit of distance.
What is really important is the colour I mentioned before – hard to capture on camera, since it is a bit on the neon side. Think pink highlighter dipped in youghurt. 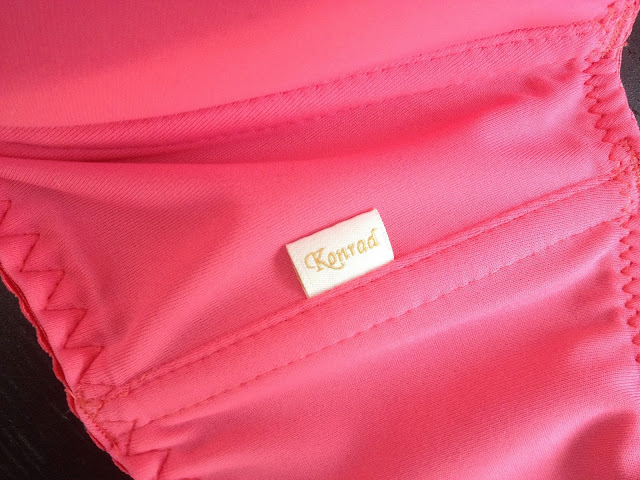 When it comes to comfort it is another aspect that got better with time. At first this Konrad Lingerie b bra could be worn for 6 hours tops. Now I don’t feel the urge of taking it off after a while, the cups fit better and the band seems to have been broken in a bit. 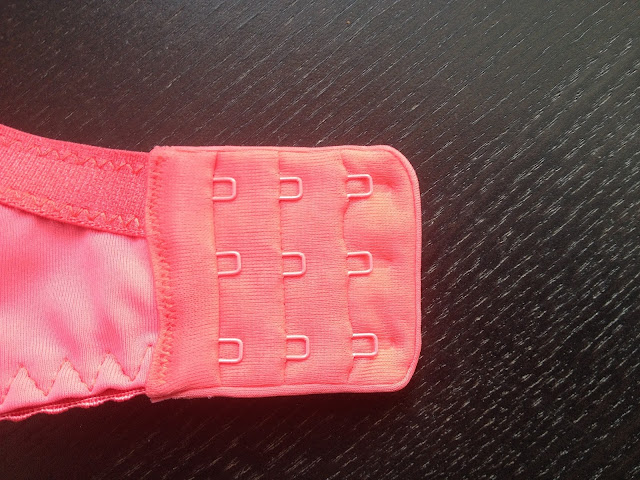 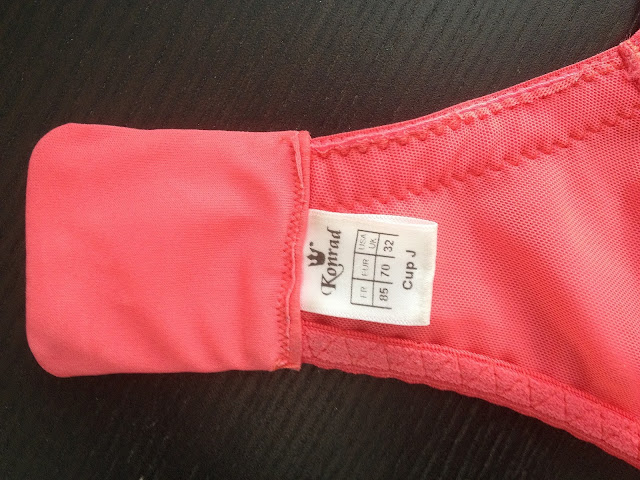 The fastening doesn’t seem to be the kind that would give up on me anytime soon and returns to its original form after wear, which makes Coralia a candidate for success. The bra made me suspicious at first but won me over with how it adjusts to my boobage. And it is pretty sturdy.
The details aren’t very sophisticated though. 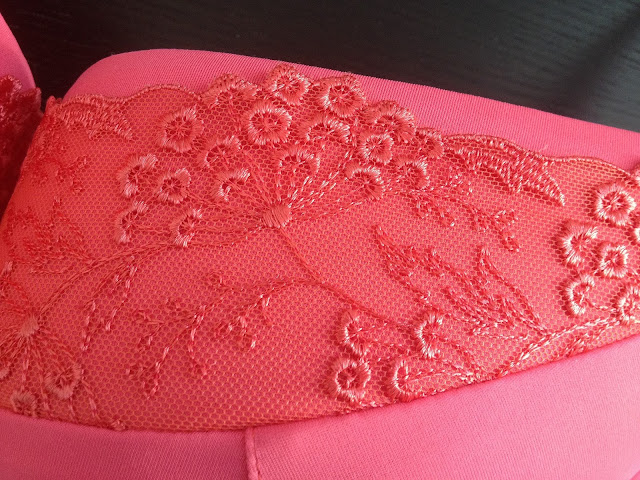 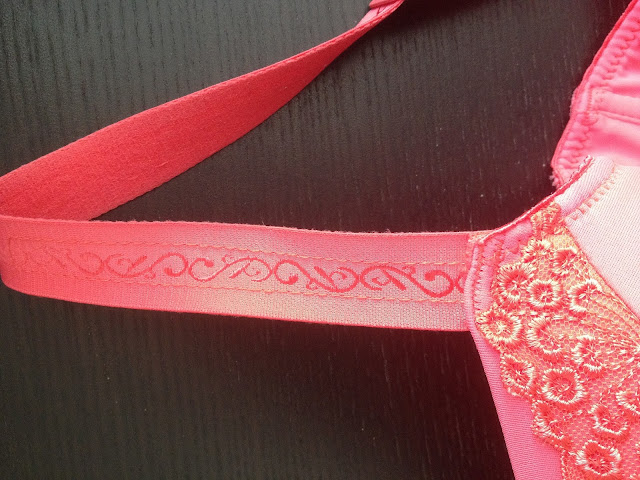 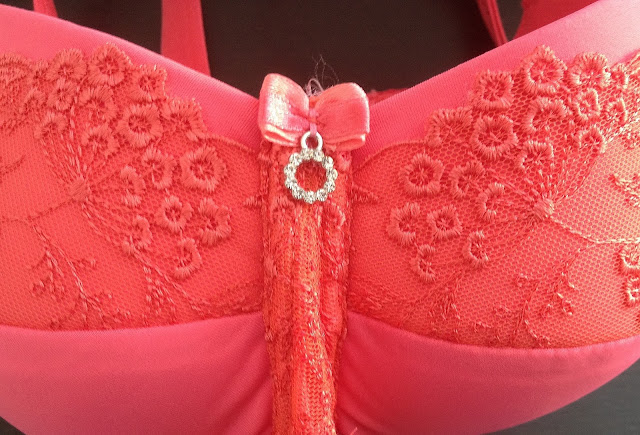 A bit of lace, a bit of embroidery on straps and a trinket on the gore. Standard, I should say, but the color is eye-catching enough to make the whole design sufficient in terms of ‘wow’ factor.
The lace stands out a bit under clothing.

My biggest problem is that the stock pic is nowhere near close to what the bra looks like on real human boobs with proper size being worn, at least in my case.


Comfort grows with each wear, so I can’t complain here. In general, this bra is not perfect, but it is a step in a right direction. 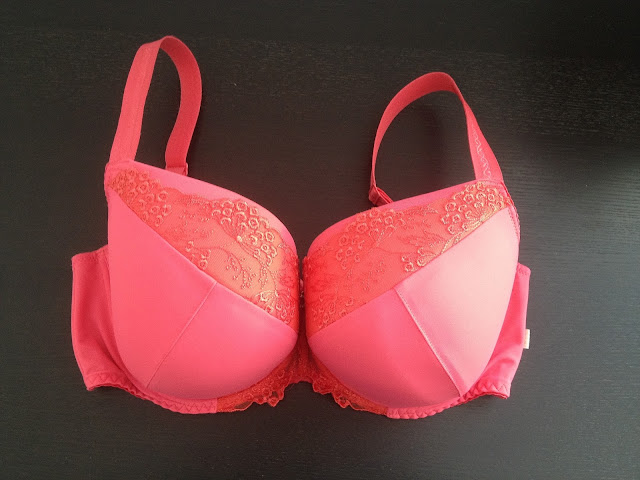