For a long time I tried to figure out what Ruby makes me think of. The netting on the cups reminds me of fishing net, but when I actually received the bra and found out is it brownish, not steel-gray / graphite, my imagination started chasing the elusive connotation I had in my mind; there was something but I could not grasp it. And then I watched The Curse of the Black Pearl during my lunch break. 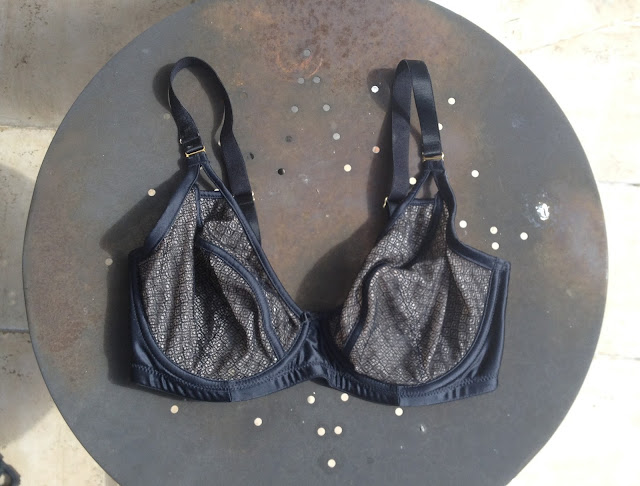 When it comes to aesthetics, I can’t really point any flaws in Ruby’s design –  I can tell that the designer has been inspired by the strappy trend, but the model echoes the source material so subtly that even the opponents of the harness bras will enjoy Ruby. Cups are made of netting with square-ish pattern, prettily contrasting with brownish-beige underlayer. I really like the use of black satin ribbon to bring out the seams; the model gets a little more mature and sophisticated, without any vulgar aesthetical shortcuts that many designs feature. 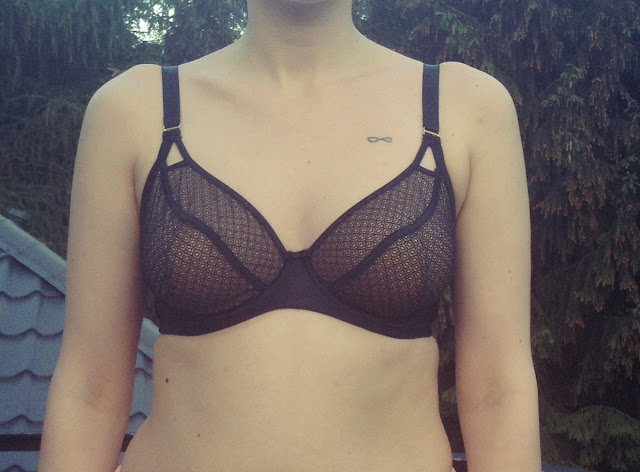 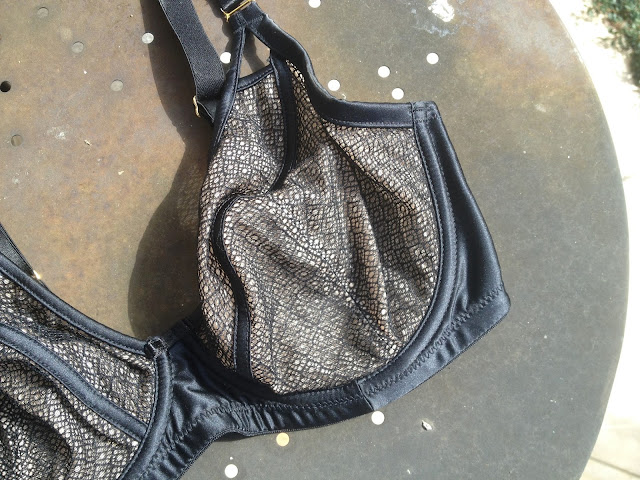 Gore is decorated with simple, black satin ribbon – it coordinates well with the rest of the features. The satin is thick and noble, and makes an impression. Ruby is my favorite design of SS/17 collection, and one can see why 😉 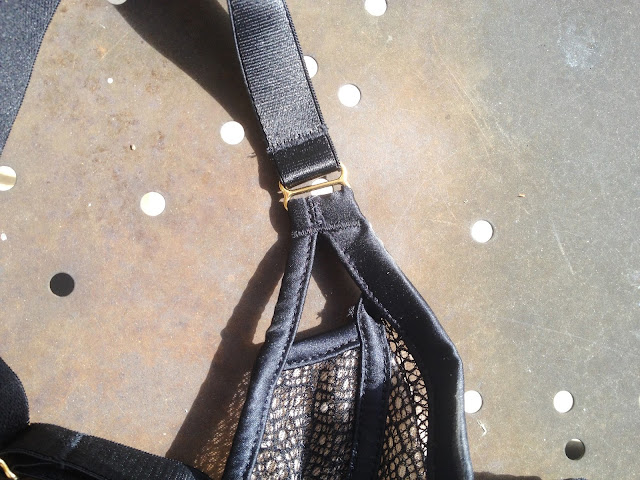 Although the design really speaks to me, the construction fails and lets me come back to square one with my usual Panache issue: stabbing gore. The Ruby is the first bra with which I can identify the reason the wires stab me so badly though. Band stretches the cups out so much that wires comply and with stretching the end jab me in the flesh. The problem can be remedied with going up a band size, but that will cause the band to ride up. I have to admit that Ruby is not a model compliant with my body, so ladies with shallow chest and those who are exactly between bandsizes – beware. I plan to change the wires for shorter ones, because the extender helps with stabbing, but still makes the band ride up. It is interesting that Ruby started to jab me after a while and not with the first wear, which makes me more sure about the stretchy band hypothesis. Despite the problem bra does not make a triangular shape when laid flat and fastened. Happily the stabbing is not even half as bad as what Pulse did to me. 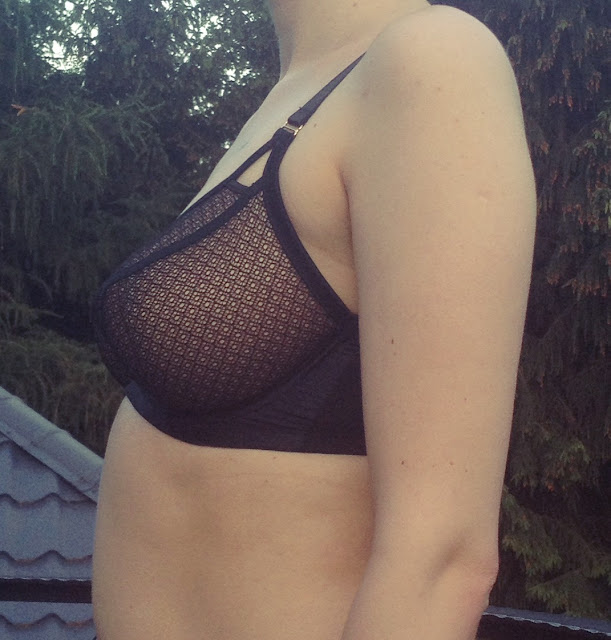 The shape is slightly pointy, but rather natural – I really like it! 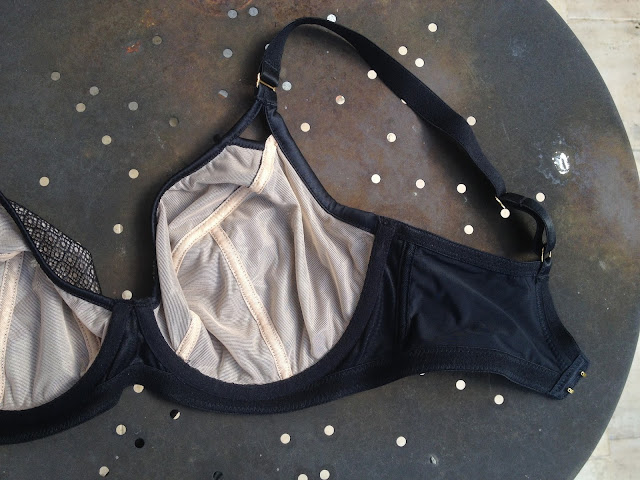 Marquisette that lines the cups brings out the netting pattern. 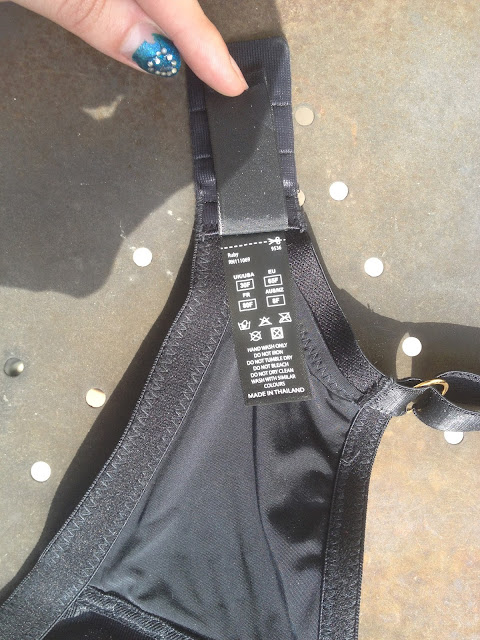 Craft is perfect, as always with Panache products – no flying threads or skewed seams. 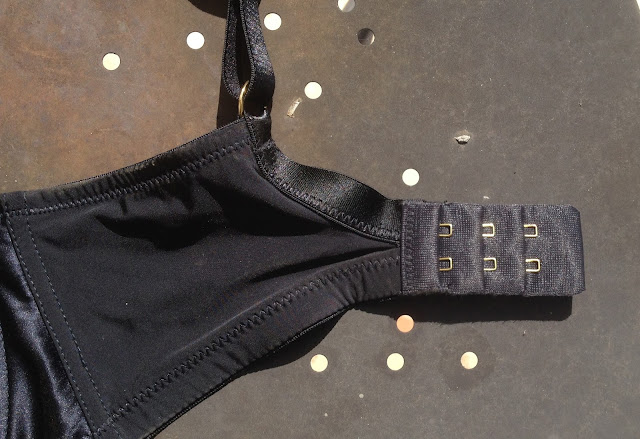 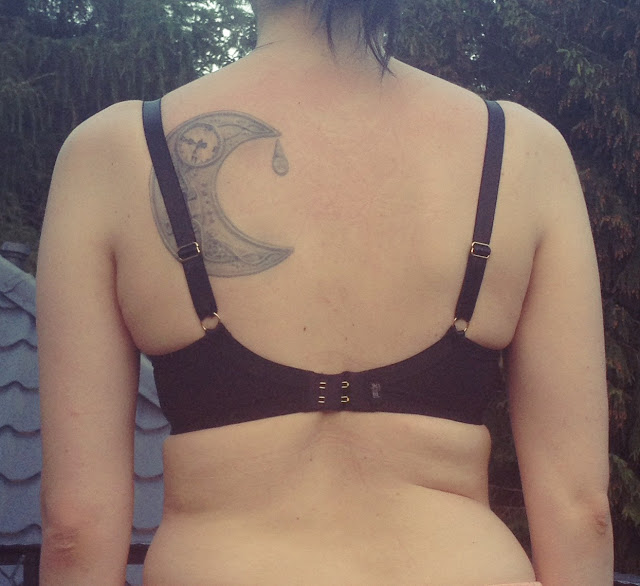 Ruby is my first Panache Black bra, and although the stabbing wires make me weary about the brand, I am curious as to what other aesthetic solutions will be featured in future collection. The Black series was supposed to be a descendant of the famed Masquerade, but it took a left turn and became an absolutely new kind of sexy lingerie that in my humble opinion is much better than Masquerade: if you compare the designs, Black bras are more elegant, austere even. A few models were adapted to needs of Black line, like Ardour, and I think that Panache hit the jackpot with the new aesthetic. Coquette in satin is a cliched classic, now are the times of refined femme fatale, who throws some office-vixen attire over her dessous. That is right up my alley, although I couldn’t be forced into a pencil skirt. 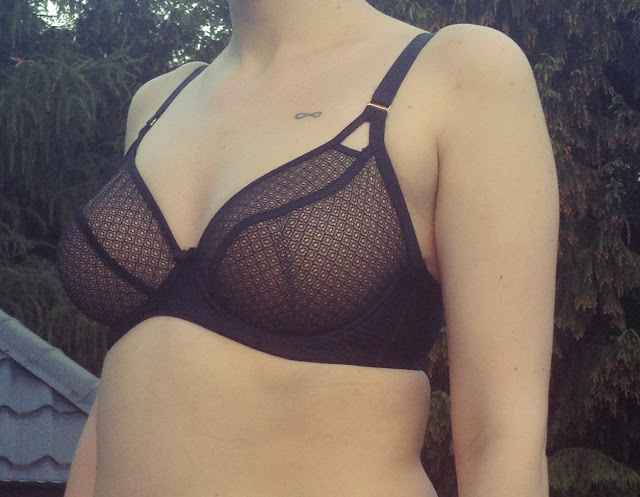 Ruby costs about 240 PLN in Polish stores – a tiny bit too much for a student’s wallet. Fans of the brand will think about grabbing Ruby off the hanger, but the novices of bravangelism will hesitate. I think it is a decent price for a very decent product, although the gore problem makes it hard for me to judge the price objectively. 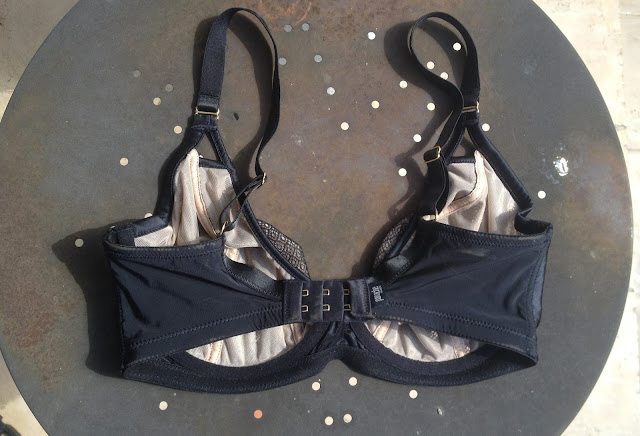 I am waiting impatiently for Panache’s contrating show (it is this weekend! Check our fan page for a video trip around the show) to see what the brand plans to enamour us with in the next SS season; I am curious what the designers will present. I wish there was something in peacock green (as always) and I hope the honour of being featured in this colour with be granted to Ardour, but that is just wishful thinking. If you want to see what will pop up in stores during the next couple of months, peek here. 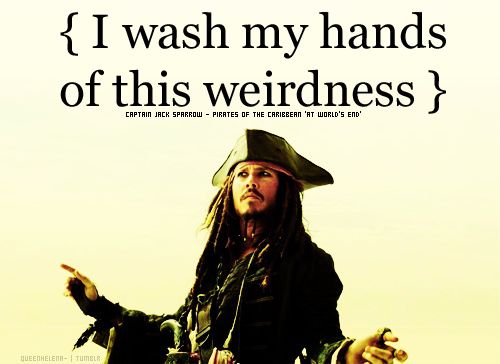