Róża is one of those cheaper Polish brands that I usually looked down up with some suspicion. If it is Polish, it must have been manufactured poorly, homo sovieticus is live and well. After a few very good experiences with Polish brands I revoked my previous state of mind and simultaneously started to expect more from Polish bras. Vena, Incarico, Wellfitting and many more brands showed me that Polish lingerie can no only be quite good but also better for British or French boobs than British or French bras 😉 Up to know I tried Róża’s Caryca, metallic, apple-green soft bra and Ilaris, glittery longline. Neither fitted me well, mostly due to the fact that choosing the size was a hit and miss situation – Róża size guide puts me around 75C and the Caryca bra in 70E made me quad and the band rode up my back. 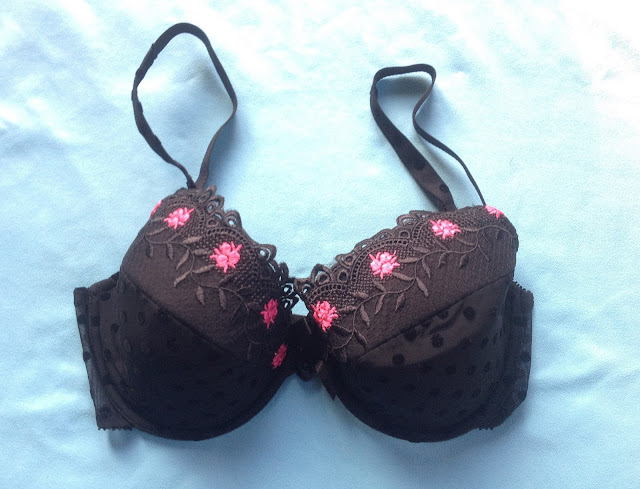 After unboxing I unfortunately noticed first of all that the fabrich choice was poor at best; they just feel cheap. As we all know that luxuruy of the fabric does not always equal their functionality ( I have never seen bra more sturdy than my 75E Anfen finding that retails for 9 PLN WITHOUT PROMO ), but in this case the materials the bra is made out of aren’t very functional or nice to touch. The band is 66 cm and stretches out to 90 cm, so there goes your fit; I would have to wear approximately a 55I in this model to have the band stretch to 75/76 cms I need. The band is also made out of a signle layer of dotty mesh and some flat elastics which is a classical construction mishap. Ye constructore, thou goatish sheep-biting blind-worm! Is that really so hard to compherend that a band made of one layer of pantyhose-level mesh will not hold anything properly? 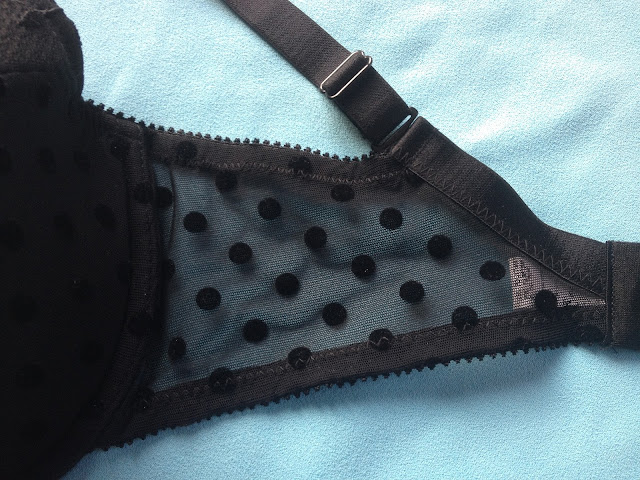 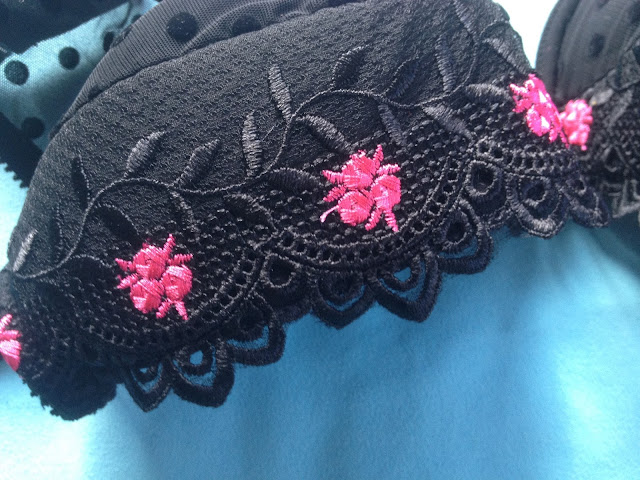 The clue of the design is the embroidery – those pink bits look like rhododendron flowers on black lace or jaquard. Not very impressive, I would much rather the deisgner left the dotty part and got rid of the pink blobs, spending more time on choosing more dainty a lace. Or maybe just ditch the lace altogether and add some flat ruffles, like the ones on the panties. 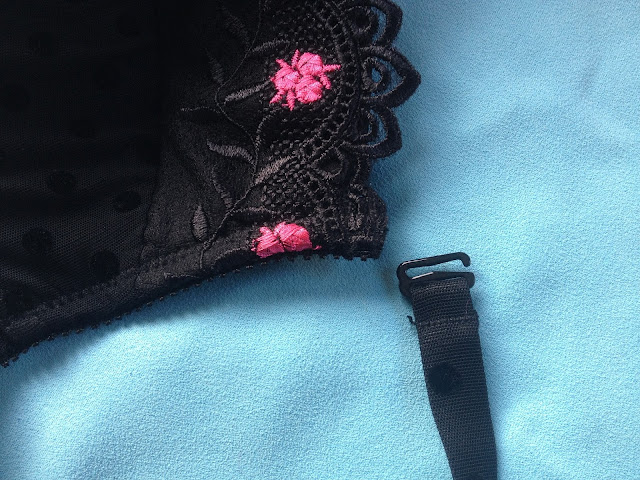 Removable straps – why? This bra couldn’t be worn as a strapless. 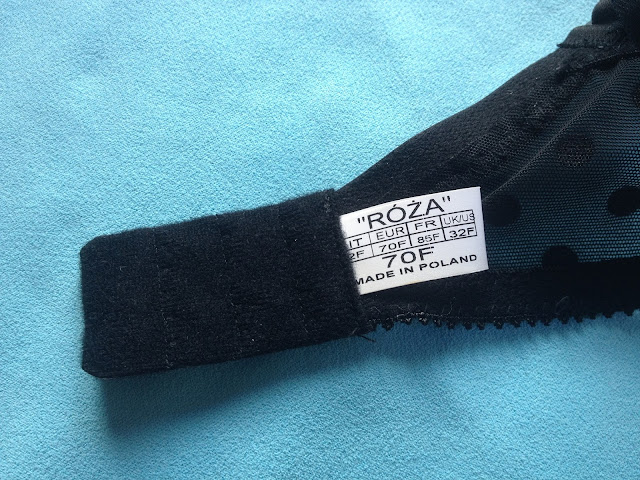 The size table says that 70F in Róża is equivalent to UK 32F, which is not very far from truth, since the cup is pretty much like a Britsh 32F, but still – this is not direct translation of the British size table given the double D’s the British sizing has. 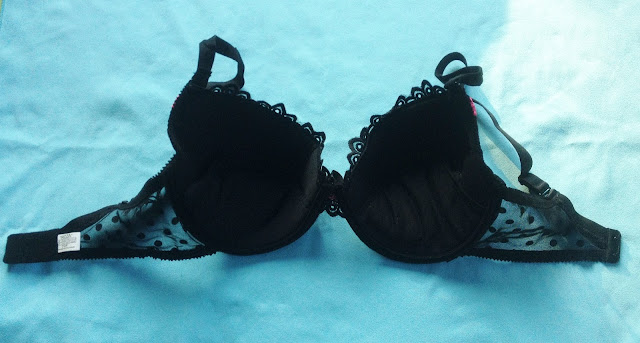 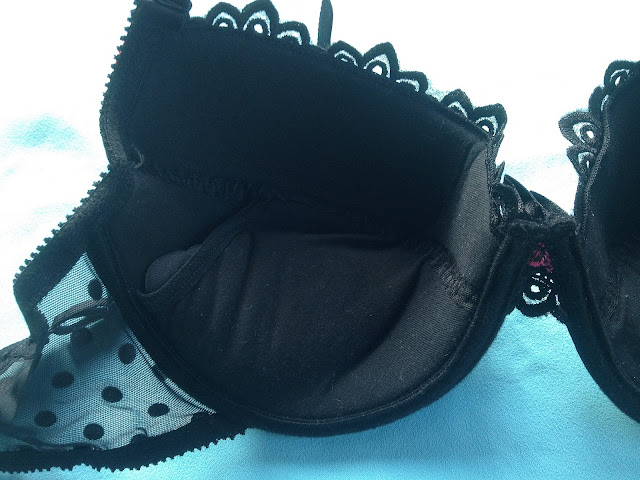 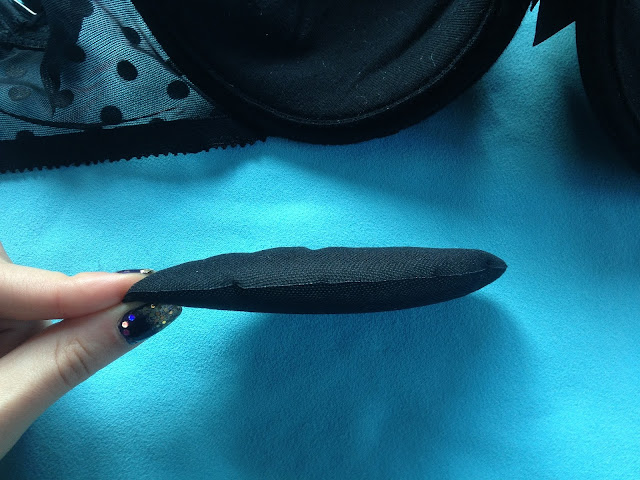 Scarlet is a push up with very thick removable padding; I had to take out both cookies to try the bra on since with them in I was quadding all over the place. Pockets are big enough to fit a second set of the cookies, so this might be a bra for girls with big assymetry. The bra itself is quite comfy, the wires slightly rub against my ribs, but that is to be expected with a bandless bra. 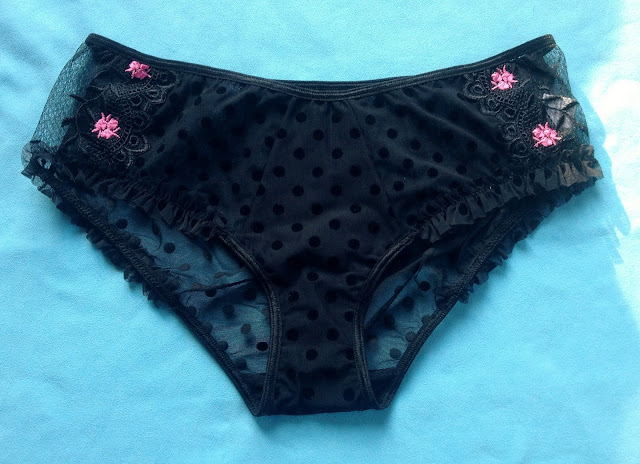 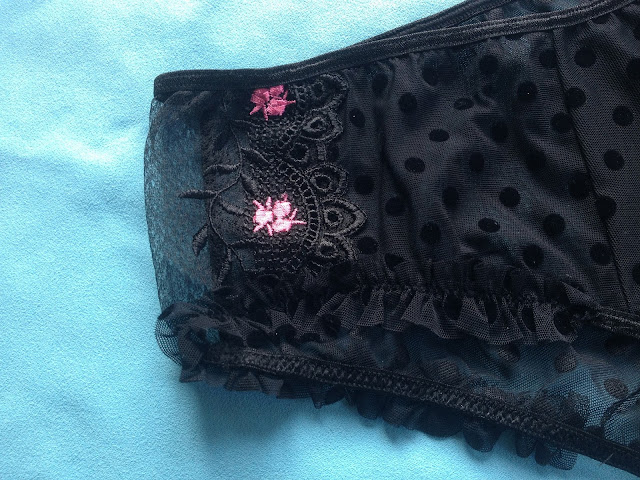 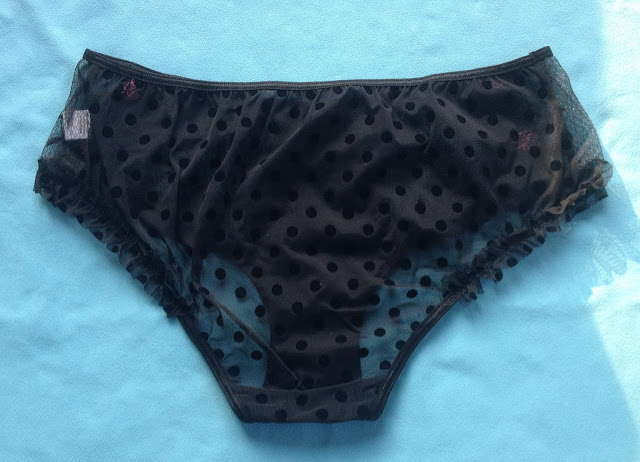 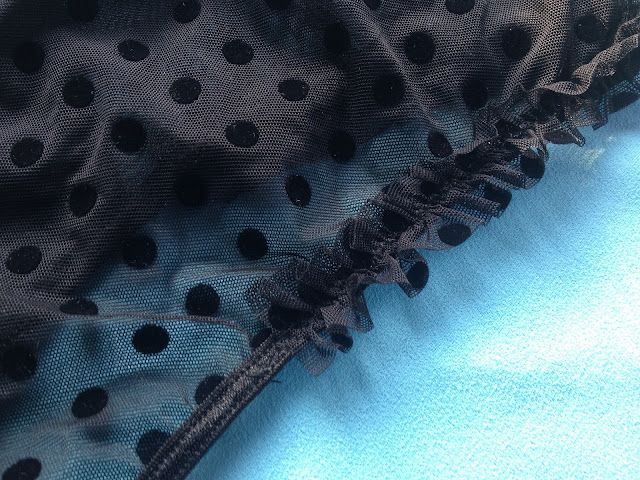 Panties are the main event here and the reason why I decided to purchase the Scarlet set – pretty af. Those ruffles, those dots, that everything! I really wish the bra would be as pretty as the panties, especially that it wouldn’t be too hard. It would suffice to put that dotty mesh on nude fabric on the cups et voila, beautiful set is born. It was really hard to catch the dots on the black fabric of the cups with my camera the bottoms look like they were from a completely different set. They fit true to size, pictured size L. 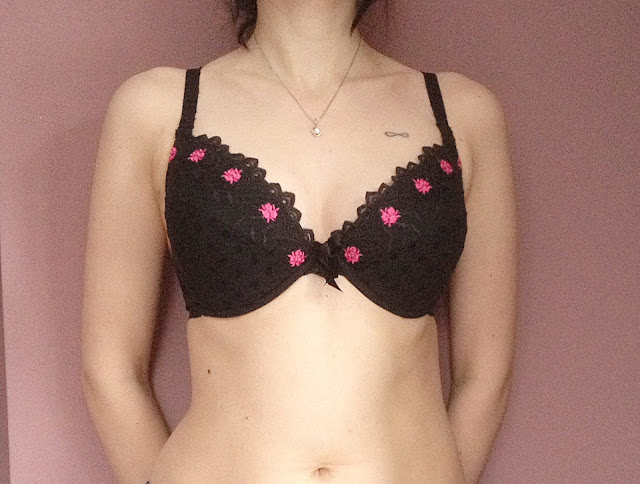 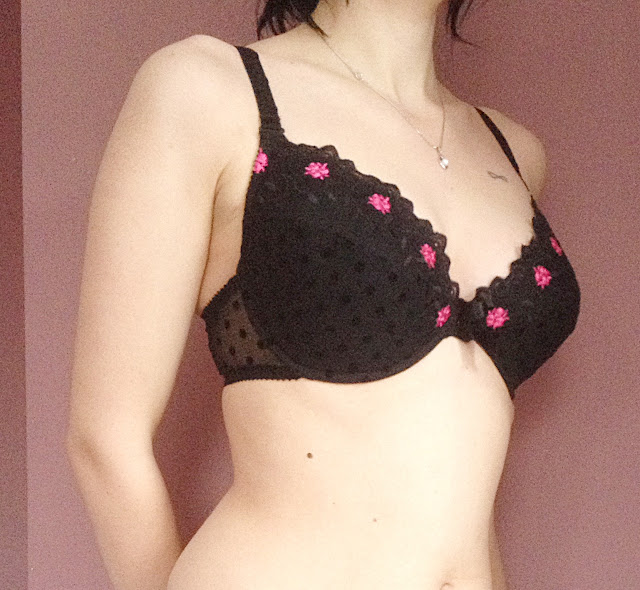 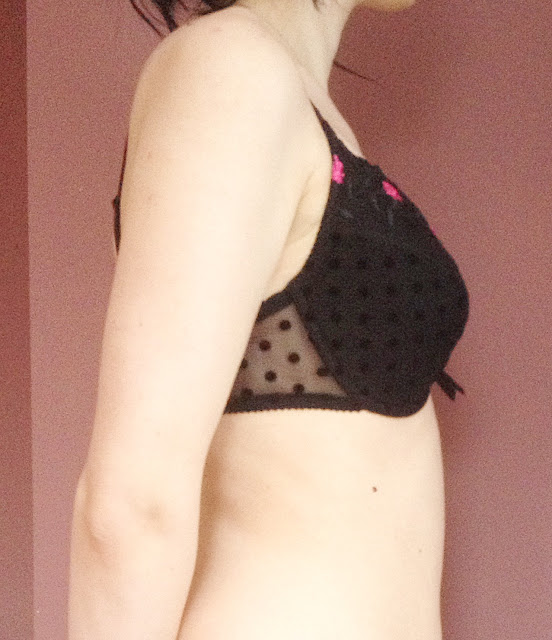 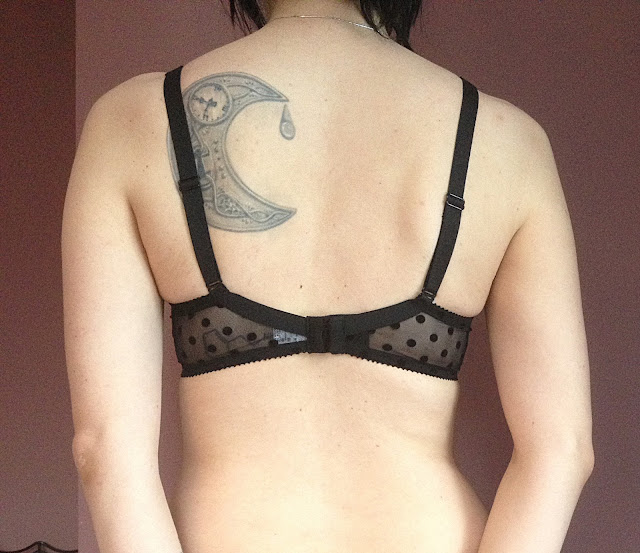 As you can all see the shape does not wow me – these are those typical pointy boobs so well known from the bad plunge concepts. The padded part is misplaced, pushing the boobs upward and making them look like sunny-side-up fried eggs. Can you see how the wire hangs just below my inframammary fold ? That is the effect of badly sewn bandless bra on my boobs; it pushes my breasts around instead of holding them. The size is also badly rescaled and the bra hs a construction for smaller sizes of boobage and measurements of a bra for bigger boobs. Do you see the problem here? A 70E bra will be too narrow for me, while the boobs will have a shot for laying down in the cup somewhat anatomically correct. A very similar problem is very often encountered in old Katie Price bras: 70D was wayyy too small, 70DD was very small, 70E was a tiny bit too small, and the 70F was wayv too big. There is no one size in which width, depth of the cup and the number of seams would will all simultaneously work in favor of my boobage.
To sum things up – like in a big number of Polish economy brands what we have here is a good idea with a poor execution. I wouldn’t recommend the brand since of all three cuts I tried only the Ilaris fitted me somehow due to a forgiving, wide band.
And for the cherry on top – a piece of traditional Polish equivalent of Billy Ray Cyrus: Spotted Panties by Bayer Full. 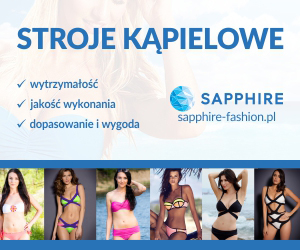