Scantilly is a younger (younger and naughtier, that is) sister of Curvy Kate and Flirtelle. If you miss Showgirls and like the asthetics of Panache Black, you might interested in Scantilly, but bear in mind that while Showgirls was a line of cabaret-like lingerie which was supposed to invoke burlesque connotations, Scantilly is supposed to be much more boudoir, seductive and even a bit retro. The first bra I wanted really badly was the All Wrapped Up, a strappy plunge, but it is incompatible with my boobs. The company offered to send me a Peek-A-Boo which comes in really hot colours: chartreuse, a greenish shade of yellow, crimson, a 50’s-lipstick-like-shade of red, black and violet (since S/S 17). Cah-rayzy!
Scantilly Peek-A-Boo – 65F
Obwód rozciągnięty / Band stretched   75.8
Obwód w spoczynku / Band  61.9
Szerokość pojedynczej fiszbiny / Cup width  14.0
Głębokość miski  / Cup depth  19.5
Długość pojedynczej fiszbiny  / Wire length  26.0
Szerokość mostka  / Gore width  2.0
Wysokość mostka  / Gore heigth  8.3
Wysokość pasa koło miski  /  Wing heigth  9.0
Szerokość ramiączek   / Straps width 1.5
Haftek w rzędzie   /  Hooks 2
Ocena: / Rating:
Estetyka / Aesthetics 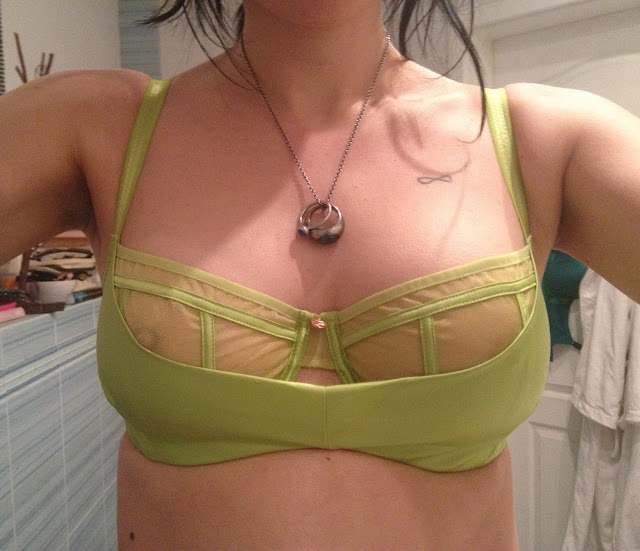 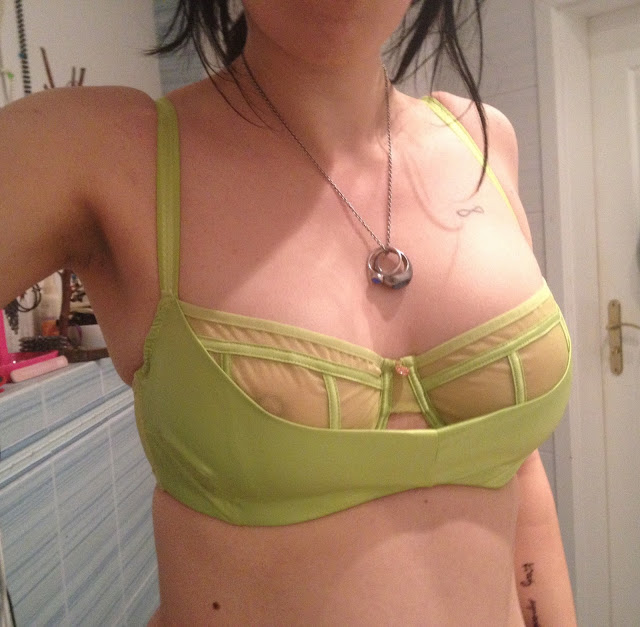 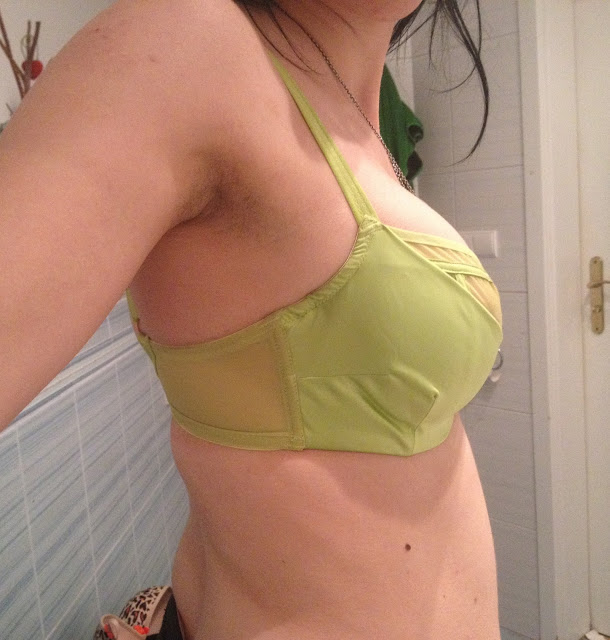 Comparison: 30F on the left, 30FF (my usual Curvy Kate size ) on the right

I was afraid of what Peek – A – Boo (Boo for short 😉 might look like on me since I have a rocky relationship with Curvy Kate balconies. The first try was a miss – my usual size of 30FF looked a bit small on its own, but upon trying it on I noticed a lot of wrinkling. What the hell, I mused, trying to figure out how the measurements of a small 30F produced such an effect on my bosom. I solved the problem after a close inspection of the mesh the cups are sewn from; it is very stretchy, so when I tried on the FF cup the cup was stretched on the bottom and wrinkled on top due to my lack of upper fullness. The F cup, on the other hand, fitted me when it comes to the bottom of the cup and the top of it. The shape is fine – roundish, but not really round. The edge of the cup cuts in a tiniest bit, but I guess it is a take it or leave it type of situation. 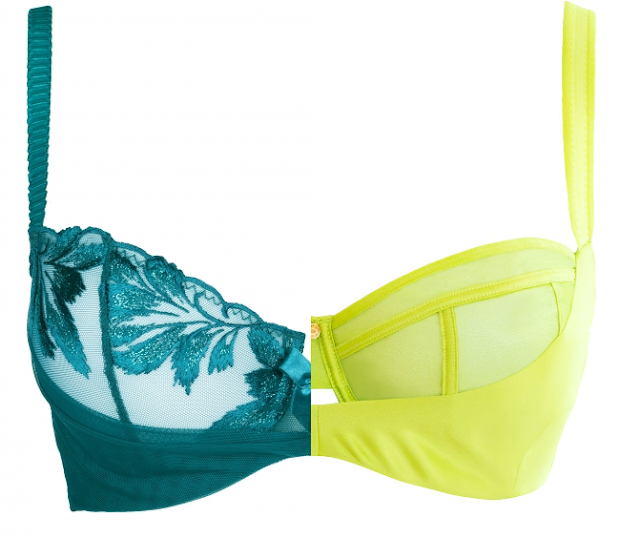 Basilic by Axami and Peek-A-Boo. A similar concept with a different execution; Basilic has a one seam, Peek – A – Boo has three. I think the difference in bust shape can be ginormous, though the stock pics show a model with clearly augmented, ball-round breasts.

When it comes to the design I have a few ‚buts’. First of all, the keyhole on the gore is lopsided which really takes some points off the look of the bra. Not that straight and also lopsided is the seam on the lower, satin part of the cups. If you look closer on the pictures you can see that the seams aren’t really that well done either. That sating belt thing doesn’t look that good, more like something that was done halfway and then shipped out of the shop, nevermind the loose, dangling part. In my humble opinion Boo would look much better if that satin part was stitched to the gore or left out altogether. It is actually something that Scantilly did; the S/S17 Vamp bra will be a black Boo without the satin strap but with … straps 🙂 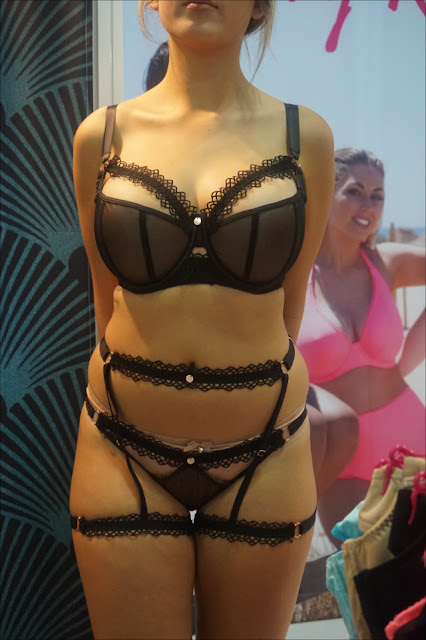 And now for some pics of the Boo – the colour on my screen matches the reality, and so it does on your screen, dare I hope. 🙂 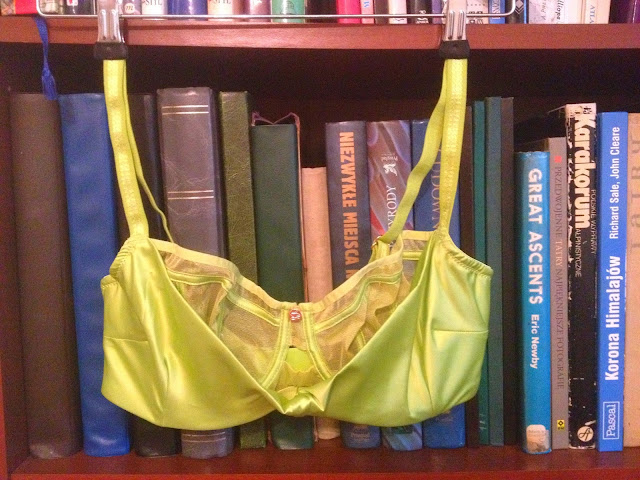 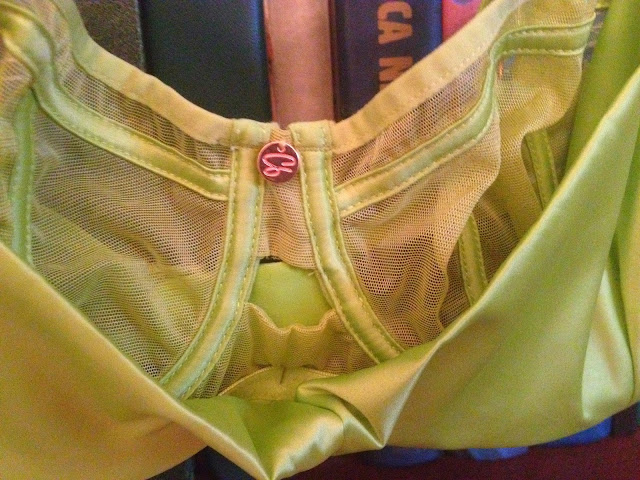 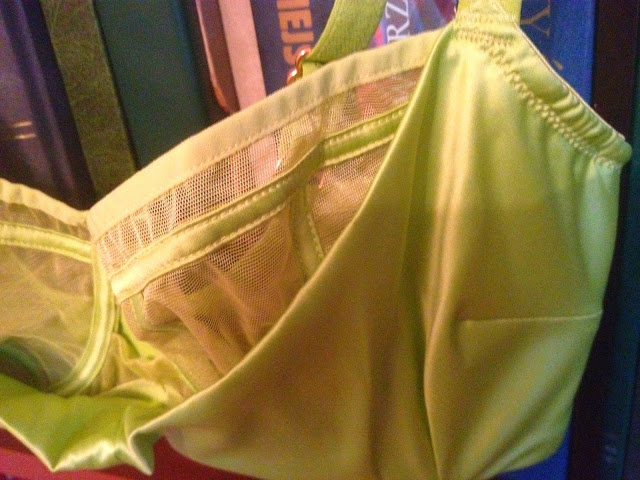 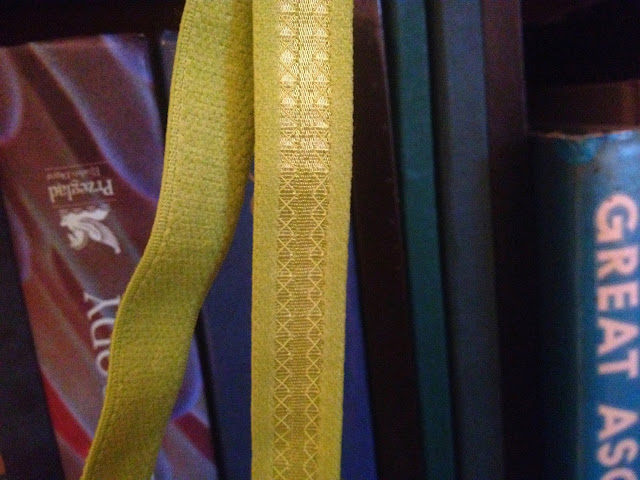 The straps are only a standard 1.5 cms, which is kinda sad. 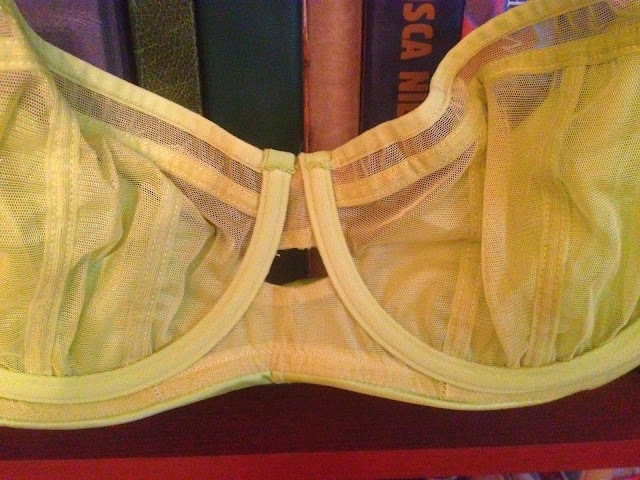 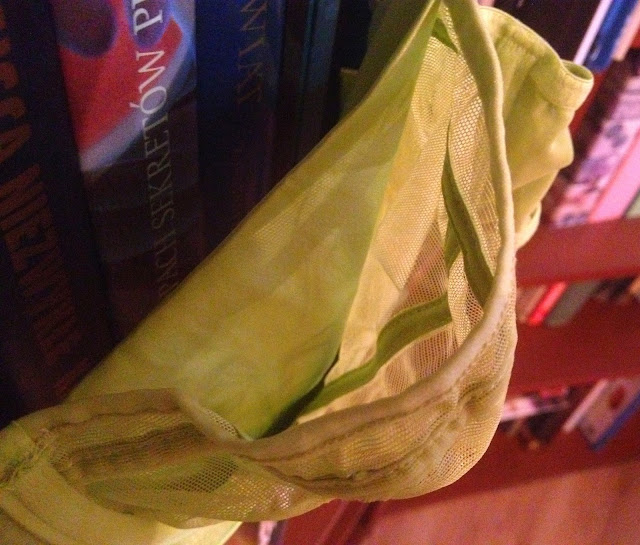 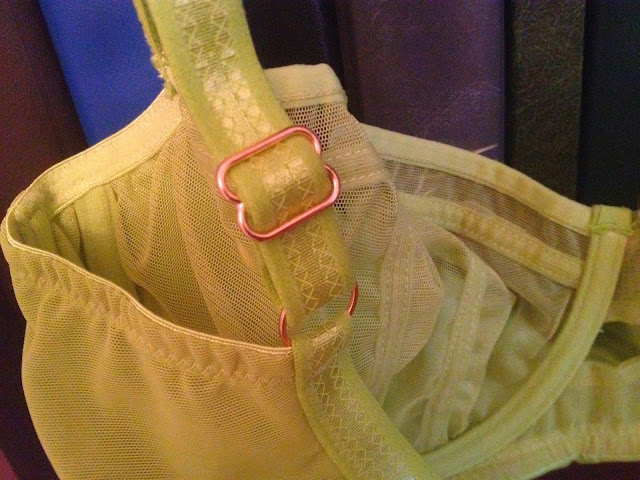 I have some doubts when it comes to those rose gold elements – they will look great on a black bra but I’d rather see them in silver on gunmental in the chartreuse bra. 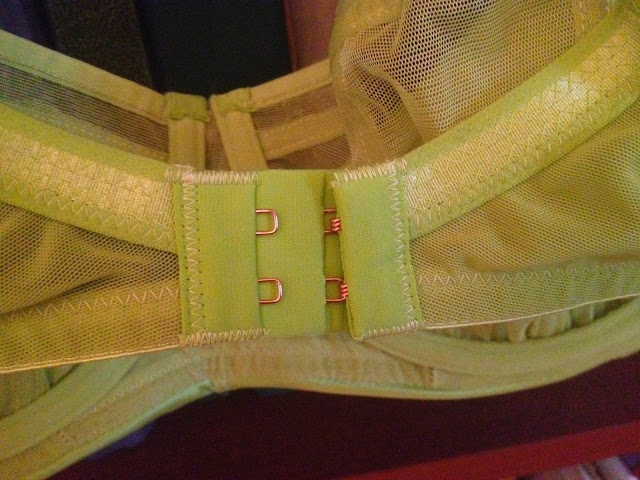 The fastening has only two hooks in a row due to my exchange of 30FF to 30F. It hold what it is supposed to hold, won’t disfigure, altough I really feel the difference between the width of the band in 30FF and 30F. My vote goes for the wider band. 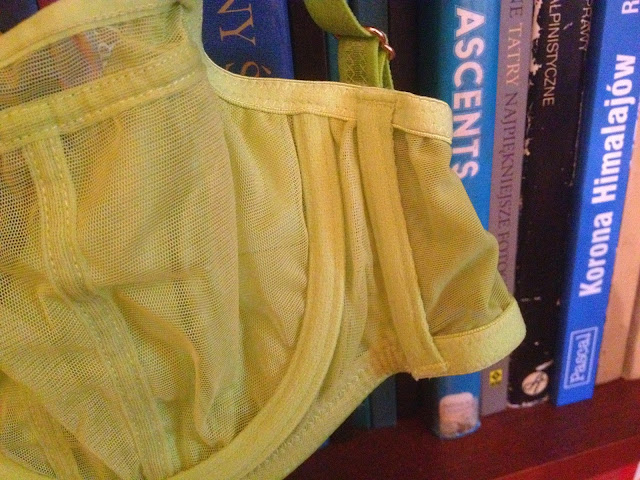 The thong is a typical seductress accessory, just watch out when choosing your size – I asked for an M (UK 12) thong which turned out to be just like my XL (UK 16) Wild thong from far far ago. S (UK 10) fits me a lot better altough it is still a bit wide in waist and short in the groin area. These are panties for short and hippy (hippy as in having a lot of hip, not John Lennon and flower power type of gal) girls 😉 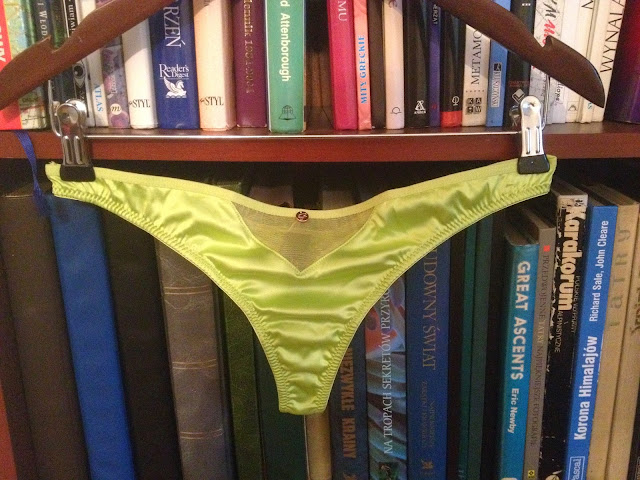 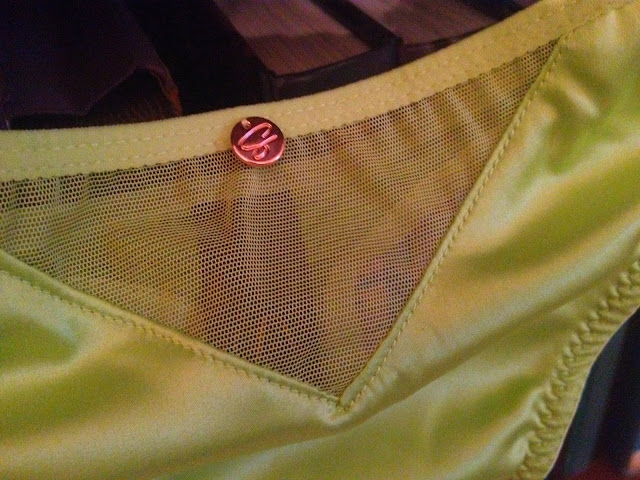 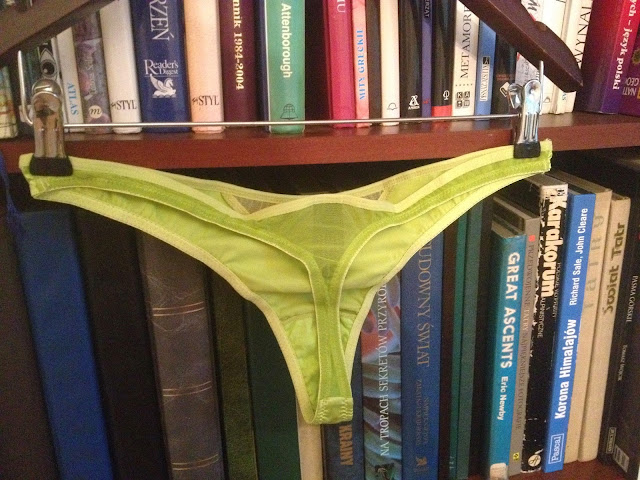 The garter belt in a lingerie evergreen – satin, mesh, foour clips, so rather a bedroom accessory than something you can wear your proper stocking with all day long. Launders well along the thong and bra, 50 degrees Celcius is fine. 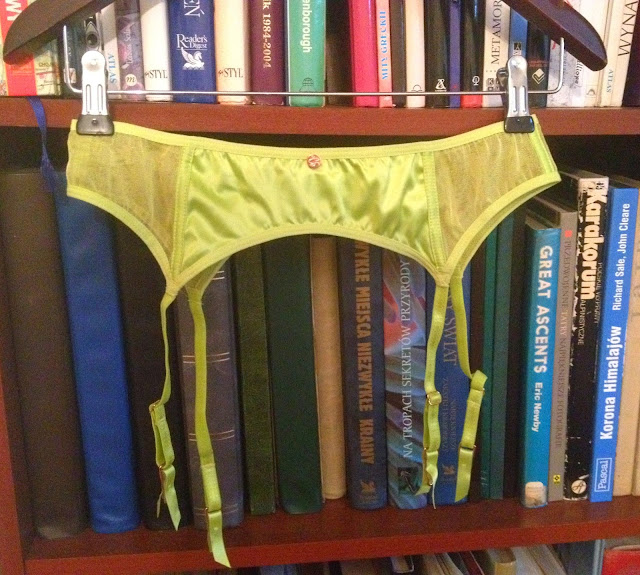 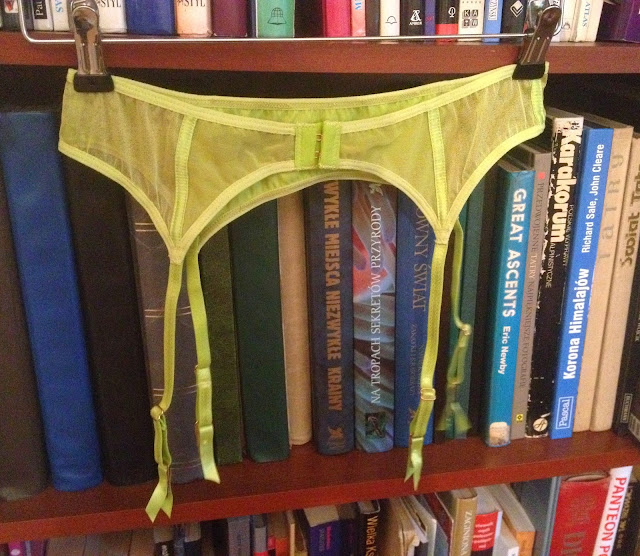 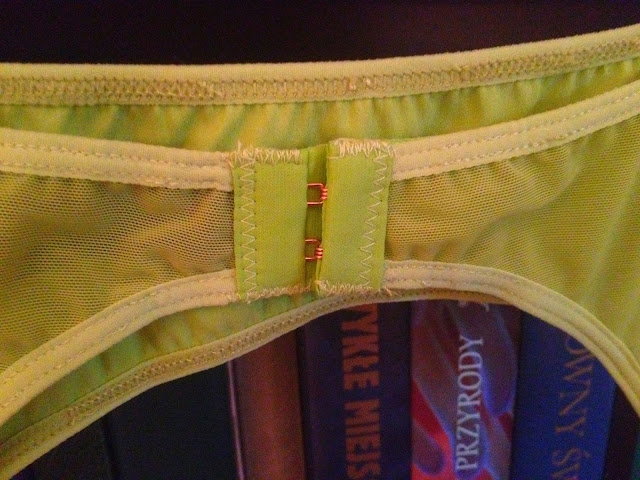 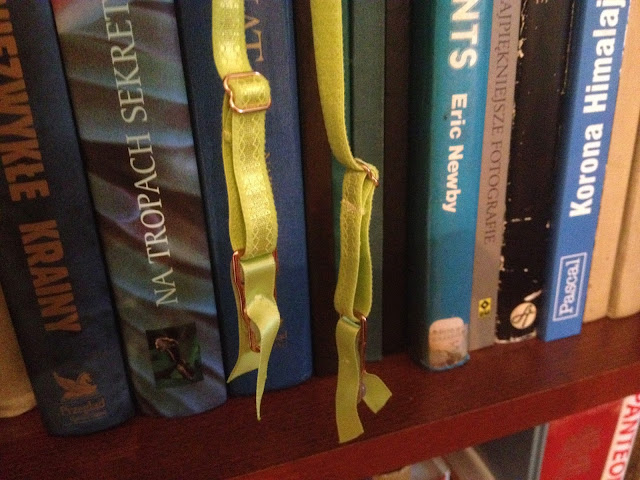 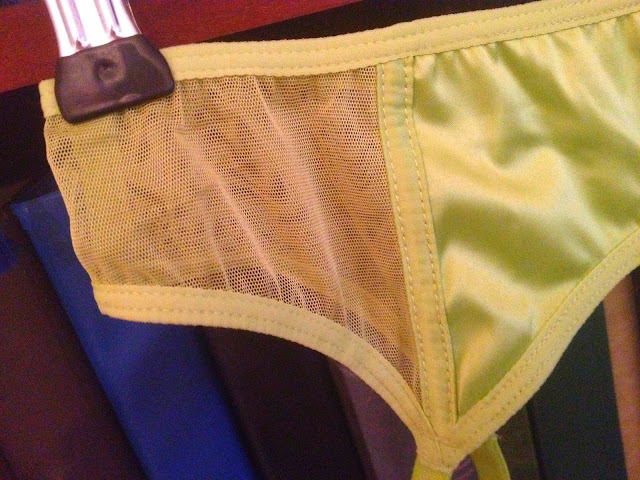 And now for my main concern regarding Boo: for the price of the bra (40 pounds, around 200 PLN as of when the review is posted) you can’t expect silk satin, altough there were some brands that gave us silks for a much lower price. Boo is made from fabrics that don’t scream luxury and aren’t different from the fabrics used in main Curvy Kate line. I do understand that Scantilly is supposed to be the premium line but for now the most premium thing about it the campaign with pretty pictures, because the bras just won”t up the ante. The dotty Showtime also showed up in my mail, and believe me, if I didin’t know it was a Scantilly bra I would say it was one of those models that come i the main lines of brands and are just a tad more va-va-voom to make people see them as musthaves. Scantilly bras are pretty and really stand out when it comes to designs, especially with the strappy bras and open panties, but that is a little too little. I would understand the price with the price of British Pound drowning (4 PLN as of when the review was posted) but it was set when the Pound was still about 6 PLN, which makes the grand total 250 PLN – a price I won’t vote with my wallet for. Don’t get me wrong, it is a pretty bra, but there is no place for it in a premium line, because it is not premium. I would look nicely alongside the regular Curvy Kate bras though, like Tease Me. 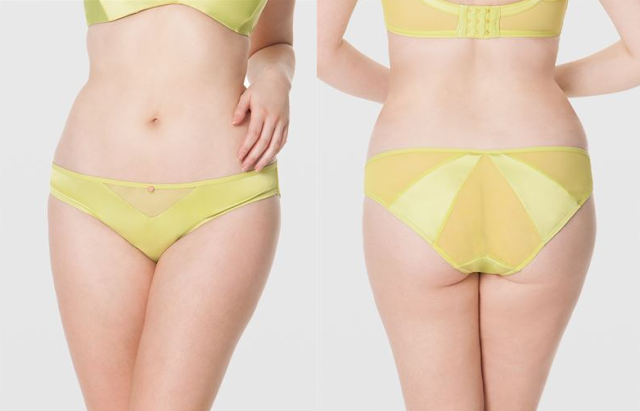 Full panties for Boo. They didn’t have my size 🙁

I also really have a problem with those botched seams and little threads popping here and there – it is really something one could have helped with before the product left the shop.

The S/S 17 collection has a few new models that really float towards luxury. I don’t think we can look out for silk satins and French guipure, but the designs look much more like what I imagined a premium line should look like.

I also hope that Boo will show up in many more colors – I wish there were some Masquerade like gemstone colours: malachite, amethist, onyxes and such, which were really just a reason for frustration for me, those goddamn cuts that won’t fit.

What are your experiences with Boo? 🙂