Tutti Rouge is, right after Mimi Holiday, one of my favourite lingerie brands. Their aesthetics really are right up  alley. If I were to sum it up, it’d be through the following dialogue:

– Let’s sew a tasteful, retro bra with bows, rouched and lacy, schoolgirl who blushes whenever she hears the word ‘sex’ – style.
– And the fabric?
– Do we have any of that yellow, neon tape we use for tracksuits left?

Thus far I haven’t had that many occasions on which to try Tutti out as for reasons unknown, no Polish shop that I know of sells it. I bought a few models via eBay and I was sold on aesthetics, even though there was always something wrong with them; either it was the lace sticking out or the cup too big or the wire was digging into my side. I went through a long infatuation with Tallulah Tattoo even though it didn’t fit me well. Knowing that you can imagine the joy I felt when I got a package from PR division of Tutti Rouge. 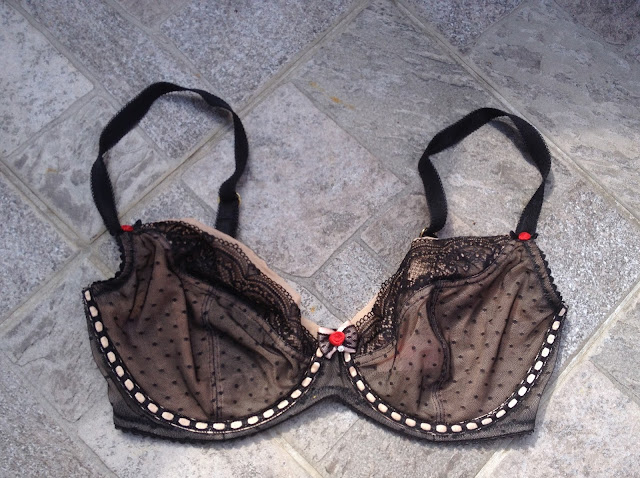 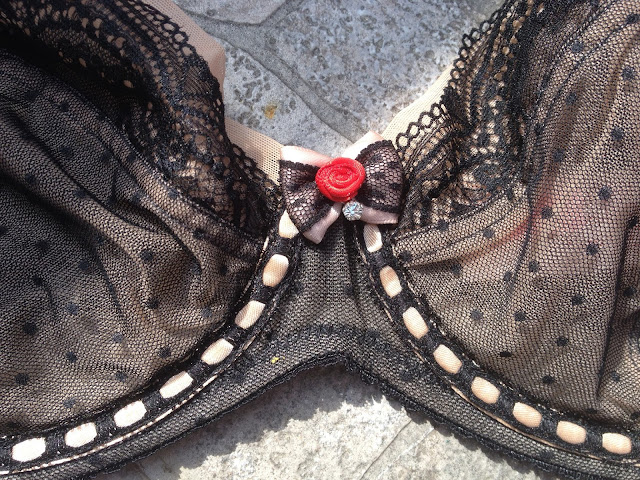 Jessica is a soft plunge/balcony made from beige marquisette covered with dotty net. The wiring rests in channels coered in openwork tape with ribbon threaded, which reminds of the immortal Tease Me. On the gore we have a double bow with a rosette and a rhinestone which makes it feel elegant without overdoing it. It’s exactly the kind of a bra Moulin Rouge dancers could wear 😉 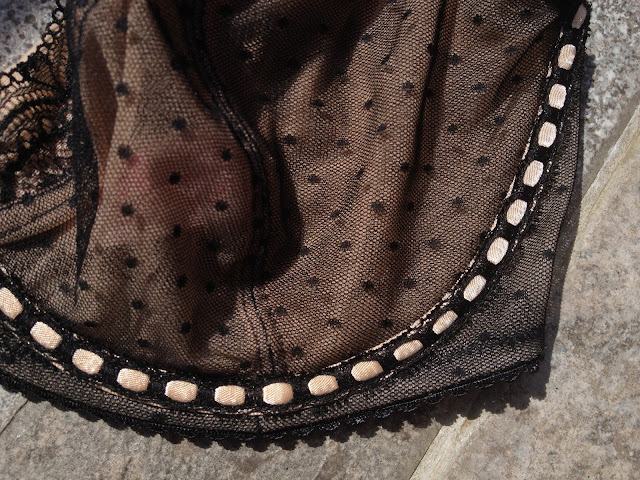 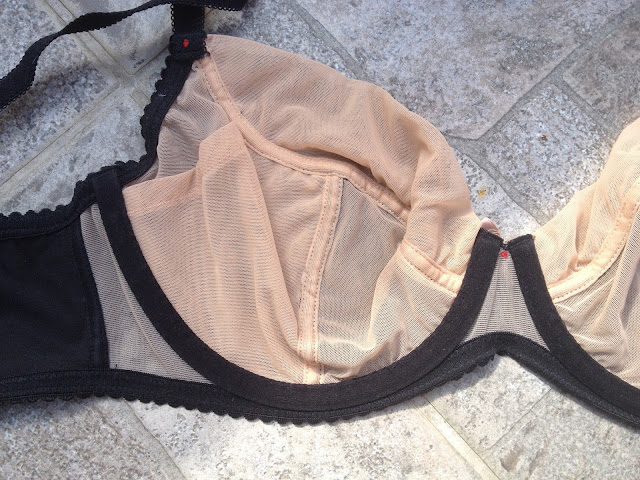 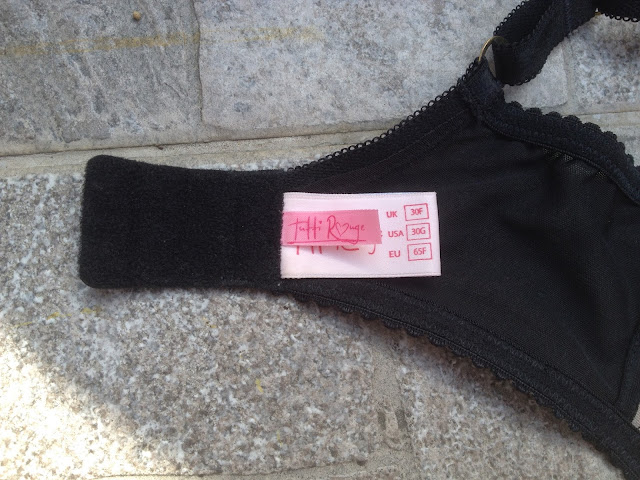 I picked 65F / 30F – the band works well, it feels neither too tight nor wide, just perfect. It’s also the first bra in which you’ll be able to see my biochemical tattoo, as its band hangs that low 🙂 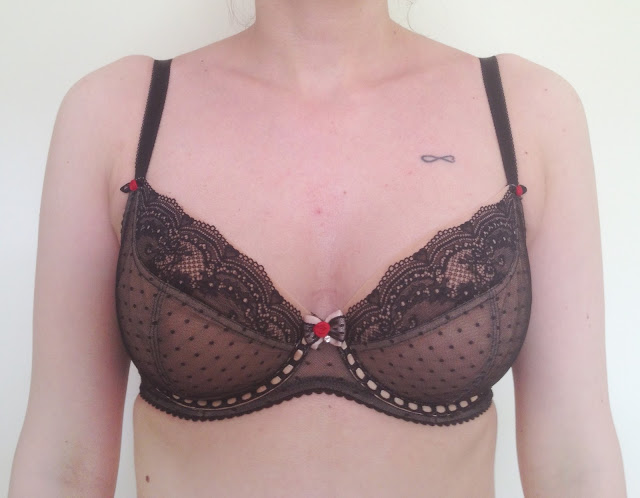 I have a minor problem with the cup: after scooping and swooping boobs it’s okay, but on fuller days I have a little spillage over the bigger breast. If you have a noticeable assymetry, I’d suggest buying a bigger size and helping the smaller breast with a cookie. 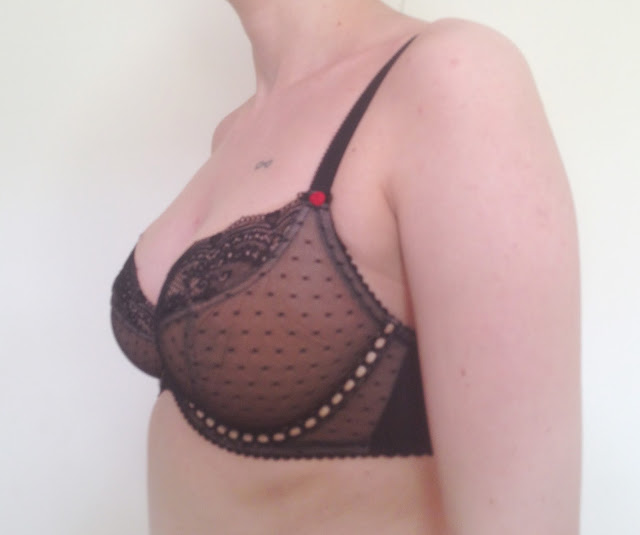 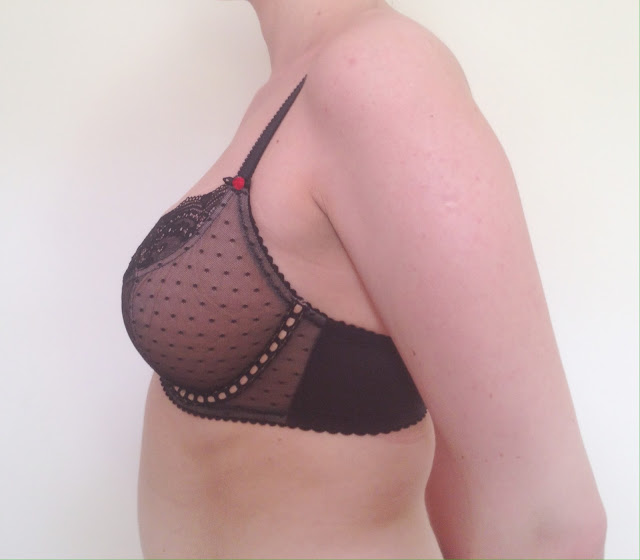 The shape is totally fine, as long as my requirements are concerned: round, not pointy at all (altough a pointy shape doesn’t disqualify any bra for me), minimally flattened. I’m not complaining! I like myself in this model, boobs are nicely profiled. they don’t migrate sideways. 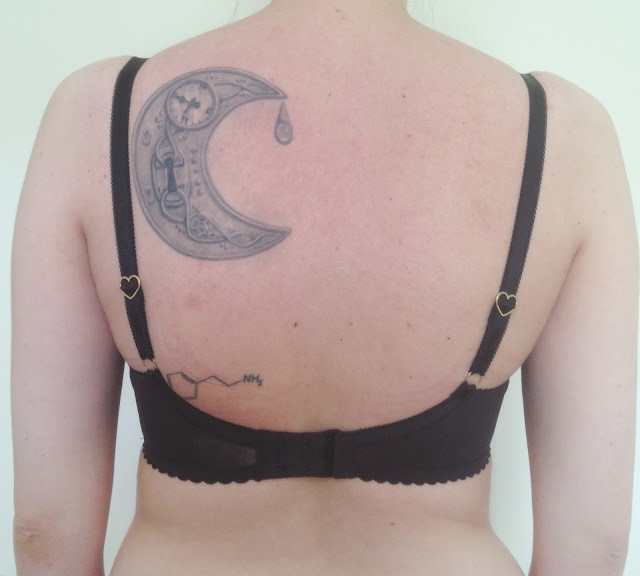 Straps regulators are in shape of a heart; on my last shopping with a Reader I was asked where can such things be bought. Hearts attract a lot of attention as they are quite unique and I like it a lot when brand has what it takes to make a stranger go ‘oomph!’. 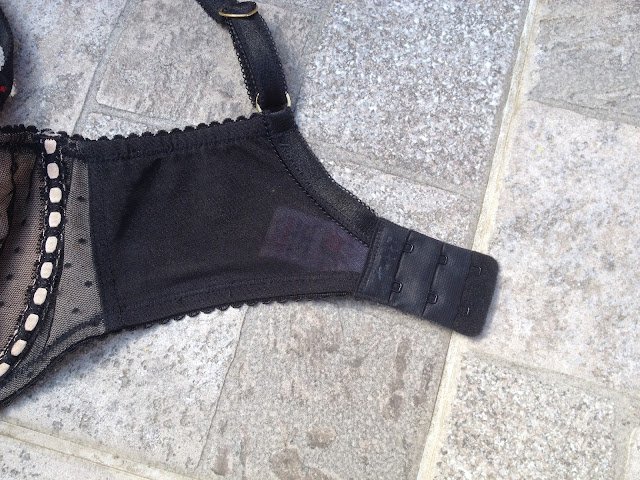 The fastening streches minimally but not to the point where I would be concerned about the integrity of the seam, altough the aforementioned fastening deforms slightly (which can be seen in the back picture). I can fasten the bra on the first set of hooks comfortably – the band doesn’t ride up, nor does it cut into my back like *cough* Freyas *cough*. 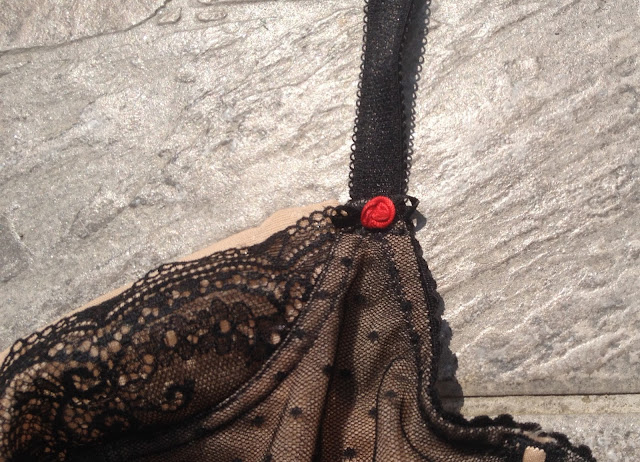 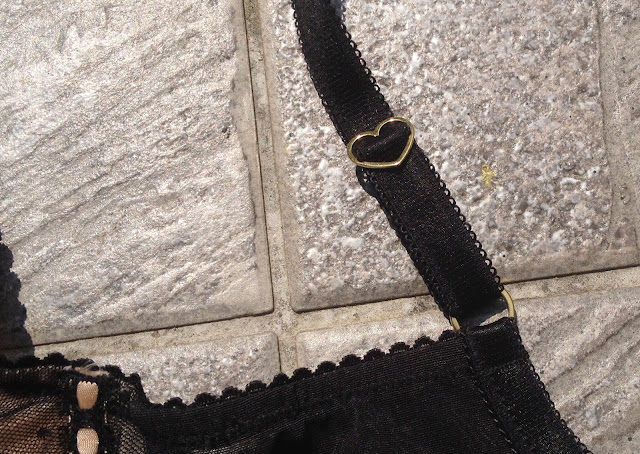 Pantaloons (and not panties, as they’re that large) should be a lesson to a lot of lingerie brands on HOW TO PROPERLY MAKE MATCHING PANTIES. Briefs from Tutti Rouge have lace, double bow with a rhinestone, polka dots, a tape with an interlaced ribbon … and on its back a rouched adornment with two rosettes. Awesome, I only wish they were also high – waisted (brands spoiled me, I admit). 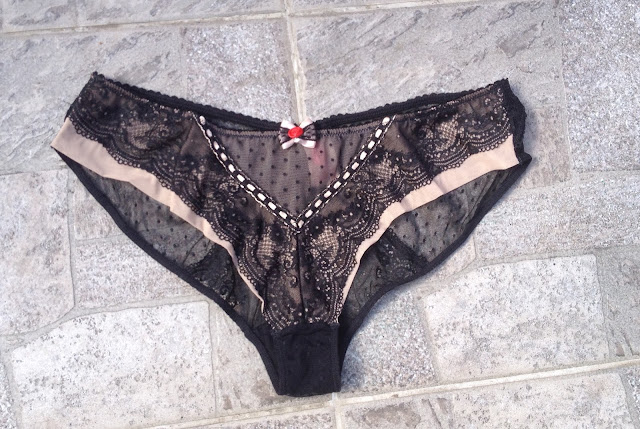 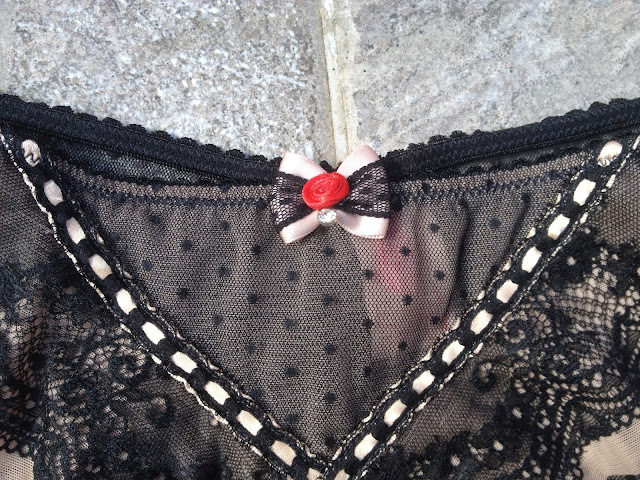 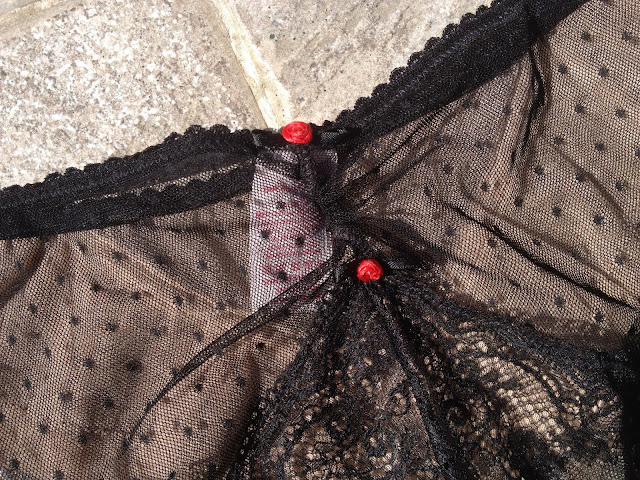 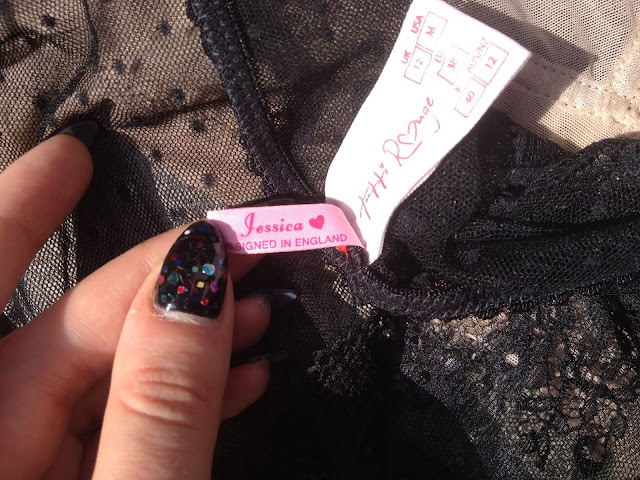 Pants size is medium; I tried both large and small (Large – I had to stich them in the groin, as they were fine in the hips, but way too low; Small on the other side chafed) and I can say this with confidence – Tutti Rouge is a brand for the wide – hipped; regardless of the size I tried out my hips fitted comfortably, the main difference was in the hip – groin distance, and that difference is plainly visible.

Finally – a little oopsy daisy.
Tutti Rouge has released the so-called Tutti Boosters – graded push-up cookies. Sample result on the model seems promising: on the left we have Jessica without the cookies, then with one set and finally with a double set. 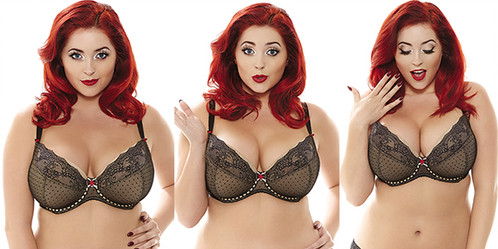 The result is fantastic, even more so as the model still has the gore next to her body. I humbly believe that pictures 2 and 3 show a different size than picture 1. Why? My 65 F is slightly too small in the cup with my bigger breast and after putting in even 1 set of push-up cookies, the gore doesn’t tuck anymore, not to mention the fact that the cookies are clearly visible, just as if I’d have put in an iPhone or my wallet in the cups. I’m slightly displeased with that, as the producer should give out promises responsibly regarding what results are possible for glandular or fatty breasts and a larger cup. I wanted to take a photo to compare, but I couldn’t squeeze my boobs inside cups with cookies. 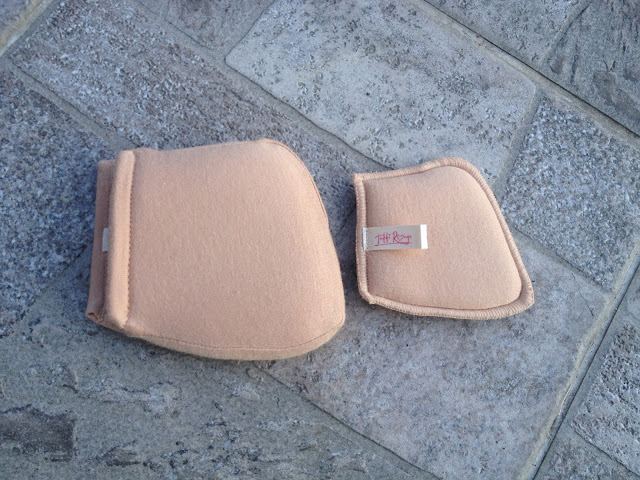 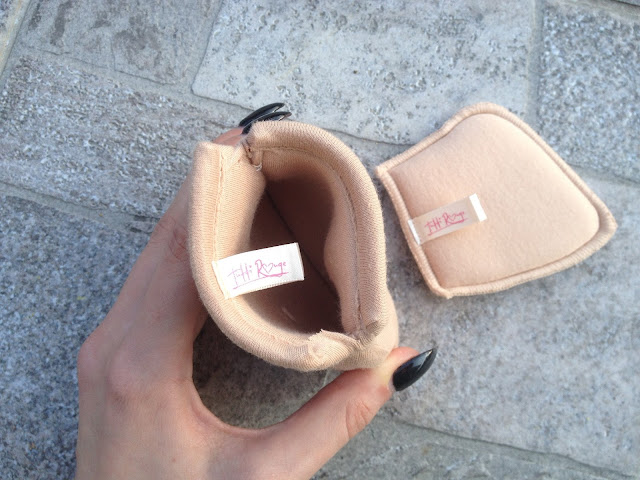 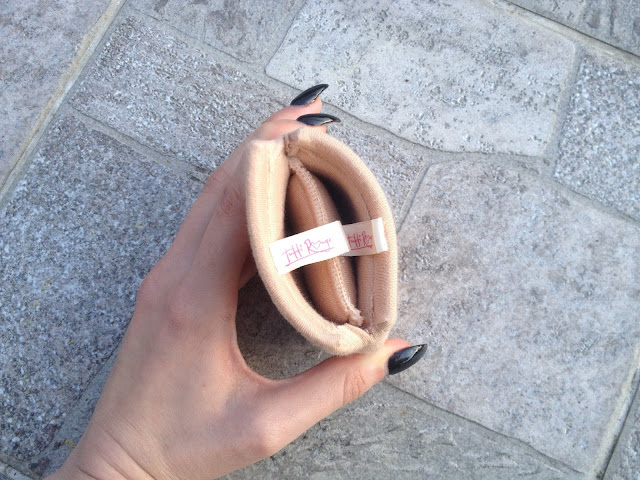 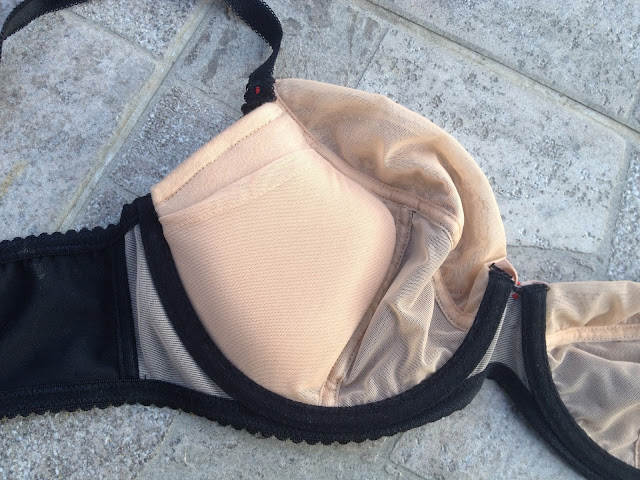 The price for Jessica is about 40 pounds (grab a cool promo for a discount down to 25 pounds here) and I can’t make up my mind on that. The model is visually great, on the other hand however, the prize is indeed steep. I talked to the brand’s PR department and I know that Tutti Rouge is currently trying to enter the Polish market, and we can expect its bras to cost about 300 PLN. I’m not sure if I could spontaneously buy anything for that amount; more likely than not it’d be a planned decision.
Attention! Tutti Rouge gives you 10% off entire collection, the coupon code is MISKIDWIE10 ! Code is valid until 31st May 207. You can shop here.